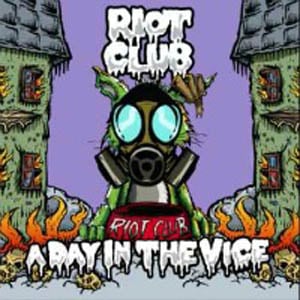 Riot Club is a ska/punk act that hail from way up north in the land of wonder that is Toronto, Canada. “A Day in the Vice” is their debut album and their first foray into the wide world of musical criticisms and critiques. Will it suck or will it rock?

When most people think of ska-punk or ska-core and their faces stop turning red with hatred and rage, those people in the know of what those two genres actually are, usually think of bands like Against All Authority, the Voodoo Glow Skulls, Operation Ivy or the Mighty Mighty Bosstones. Well Riot Club doesn’t sound like any one of those bands…and I mean that as a compliment. If I had to draw comparisons to other bands as most reviewers do, I would say that they sound like a mix of the U.S. Bombs, Leftover Crack, NOFX playing a ska-punk song and Bomb the Music Industry!. Riot Club really is all over the place with their sound and in the ska-punk scene, that’s refreshing.

“A Day in the Vice” definitely turns the dial to 11 when it comes to the energy in their songs. They take their skate punk influences and play a high energy speed punk with the ska and reggae sometimes making a cameo or other times completely taking over a song. I was more of a fan of the songs that were ska influenced like “Comfort of a Scene” and “Cut to the Chase”, but I also enjoyed the faster punk tracks such as “Punch Drunk Worked for Hemingway” and “Skateboard Kids Don’t Care”, and the closing track was quite amusing and echoes feelings that I’ve had for years.

For a debut album, I was impressed with the raw talent and energy on “A Day in the Vice”. As a ska-punk fan, I was impressed with the structure and variety of the songs throughout. At times the album would wander off the beaten path and lose direction, but those moments were few and far between. I’m interested in seeing what Riot Club can accomplish with a few more years and albums under their belts. “A Day in the Vice” was a good start.

Bottom Line: A ska-punk album that doesn’t take itself too seriously yet is full of high energy songs and entertaining song writing.
Notable Tracks: Comfort of a Scene, Cut to the Chase, Disaster, Just An Afterthought, Skateboard Kids Don’t Care
Overall Rating: