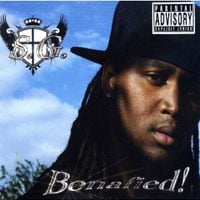 S.G. is the latest Southern rapper trying to break through the static between the coasts. Vocals are decent and are usually multi-tracked but in a slightly staggered way, for a good gang vocal effect. The melody and hook is pretty good, but unfortunately it’s practically the same for every song – very little range in songwriting here. The programming itself is tinny and cheap sounding, but charming in its low budget way.

Much of the lyrical content is about how thug and gangsta S.G. claims to be. I know these conceits are a common trend in this genre, especially on debut albums where self-aggrandizing is a rite of passage, but there’s only so much narcissism I can take. I’m hoping though that it’s tongue-in-cheek.

Bottom Line: Chintzy programming might be what makes this interesting.
Notable Tracks: Get Some Act Right
Overall Rating: