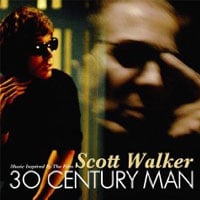 Believe it or not, I’ve never heard of Scott Walker. Scott Walker: 30 Century Man is a 2006 documentary about the singer/songwriter. The movie follows the success of Walker and focuses on his songwriting. If he was so successful, how come I’m only hearing about him now?

This album features music inspired by Scott Walker and the documentary. The album contains music from Peter Broderick, Sally Norvell, Damon & Naomi, Laurie Anderson, Nicole Atkins, Bee & Flower and many more. Besides of not hearing of Scott Walker, I don’t know who any of these people are. Am I really out of touch with music or are these people just really obscure? Regardless of not knowing who anyone is, I wasn’t a fan of most of this music on here. The music was boring, slow, and too dark for my tastes. Perhaps Scott Walker fans will like this?

Bottom Line: Music isn’t that exciting and boring to me
Notable Tracks: Didn’t have any
Overall Rating: