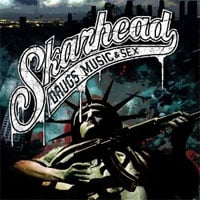 Skarhead features Danny Diablo (a.k.a Lord Ezec), who used to be in Crown of Thornz. I’ve heard music from Skarhead before and I think I’ve seen them live once before. While I don’t like the whole thug aspects of their music, I still liked this album.

The first song on the album is called “Fuck the Scene.” It’s a great way to start the album because not only is the song sound tough but it also bashes the scenes (obviously). Most bands are about making money, and worrying what they look like and Skarhead calls them out on it. Are you going to disagree with the band? I’d be afraid to even say one word to these guys without getting a Queens-style beatdown. What I like about this album from Skarhead is the mixture of hardcore, metal and punk rock. Basically it’s NYHC plus a bit of thuggery.

If you can get past the sex, drugs, and thug themes, Skarhead make some awesome hardcore music. Most of these songs are decent, and if you like hardcore, check these songs out on their MySpace page.