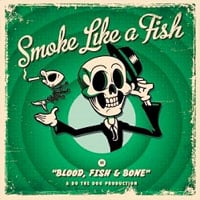 Smoke Like a Fish are one of my favorite Do The Dog Records bands. Since their debut album, I’ve been hooked on their bouncy 2 tone ska music. They finally have a new album out called “Blood, Fish and Bone” but unfortunately, the band broke up and are playing their final shows this Fall.

Not sure why the band broke up but they were one of the best bands to play ska in Europe in the last decade. Their music isn’t overly complicated; just simple ska music. But for whatever reason, it always seemed to work with Smoke Like A Fish. The vocals, the bouncy keys, the upstroke of the guitar and the horns, all the pieces fit nicely.

As far as this release is concerned, the second and third tracks “The Opera of Dickie the Third” and “Tic Toc” were the best tracks I think but the rest of the album isn’t something to snicker at either. “Rejoice” is your typical SLAF song, which isn’t a bad thing. The cover of Zounds’ “Subvert” is pretty damn cool, and I really think it was meant for a ska band to cover it. The Levellers also cover it as well, which was brilliantly done. Towards the end of the album, you’ll want to listen to “Manufactured Messiah” and “Just One More.” The band may be breaking up but that doesn’t mean we can’t listen to their music anymore. Their final album is very good, but not sure it’s as good as their debut album. But with that said, it’s still worth getting if you think your ska collection is lacking.

Bottom Line: The final (?) album from Smoke Like A Fish makes us wish they weren’t breaking up!
Notable Tracks: The Opera of Dickie the Third, Tic Toc, Subvert
Overall Rating:

2 tone, blood, Do The Dog Records, Fish and Bone, ska, Smoke Like A Fish, uk ska