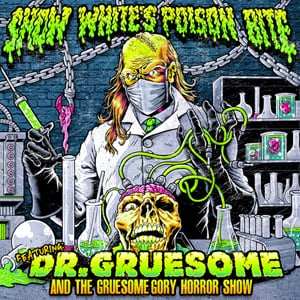 The second of today’s “horroriffic” album review lineup are the Finnish product Snow White’s Poison Bite and their extremely longwinded album titled “Featuring Dr. Gruesome and the Gruesome Gory Horror Show”. Say that ten times fast while looking in the mirror and patting your belly.

Whereas the Brains served up a platter of horror-related melodies minus most of the horror punk campiness, Snow White’s Poison Bite give you a double dose of campiness and they seem to relish that fact. There are song titles with Count Dracula, Halloween and zombie references to name a few instances.

Not to be misleading with the genre references at the beginning of this review, I feel obligated to inform you the reader that the punk isn’t much like the Misfits (although they did land ex-Misfits singer Michael Graves to do guest vocals on a song) and the metal isn’t much like Iron Maiden or Motorhead. Instead you are left with sound that is a mishmash of My Chemical Romance and a random screamo band. I would assume that since they consider themselves a metal band that it would be the reason why most of their songs are drawn out at almost five minutes long.

While I applaud the effort of a Finnish band pushing out a horror punk/metal hybrid band, I wasn’t a fan of the vocals, the songwriting and the musical style that they are trying for in general. Most of the songs lasted way too long and were quite forgettable. This round of horror punk battle of the bands definitely goes to the Brains.

Bottom Line: A swing and a miss in the horror punk/evil metal category. Fans that believe that My Chemical Romance is a horror punk band will enjoy this though.
Notable Tracks: Zombie Romance, Will You Meet Me In The Graveyard?
Overall Rating: