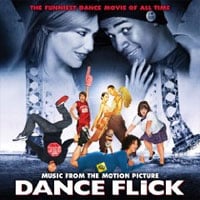 The latest Wayans movie is a parody of dance films, which is a much needed change from scary movies. While the film looked really stupid, I found myself laughing at the soundtrack. Perhaps I’ll see how bad this is when it comes out on DVD. Maybe I’ll end up liking it? Dance Flick was directed by Damien Wayans and stars Damon’s son, Damon Wayans, Jr. Why not name a kid Demon to confuse us even more? Or how about Damian, Damen, Domen, etc.? The film spoofs such movies like Save The Last Dance, High School Musical, Fame, You Got Served, Step Up 2 The Streets and Flashdance.

The soundtrack’s first track is a parody of the song “Fame.” Let’s just say they change the words around to poke fun at homosexuals. Most of the songs on the soundtrack are from the actual movie but there’s one track that isn’t. Shoshana Bush parodies Amy Adams from Enchanted with “Scrub Scrub Scrub It.” The tail end of the soundtrack contains hip hop, and dance songs from Rick “Cocaine is a hell of a Drug” James, Erik B. & Rakim, Ying Yang Twins, Donell Jones and Ranella Ferrer & Shway Shwayans. I liked the first half of the album with the parody songs but the music stuff wasn’t my cup of tea…well except Rick James.