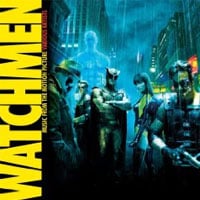 This soundtrack is quite the eclectic batch of music. My Chemical Romance and Nat King Cole on the same soundtrack…what the hell? I heard that they play most of these tracks in the movie, and they try to cram as much as possible. I guess if the filmmakers paid for licensing, they need to get as much use as possible huh? My Chemical Romance covers Dylan’s “Desolation Row” and its okay, but not as good as the original obviously. Other tracks you’ll find on the Watchmen soundtrack include “Times They Are A-Changin’” by Dylan, “The Sound of Silence” by Simon and Garfunkel, “Hallelujah” by Leonard Cohen and more. I don’t know much about Watchmen but not sure why they included a lot of random 60s-70s music. You would think this took place in the 60s. I guess it takes place in 1985 like the one commenter said down below. Is Marty Mcfly in the movie? Does he travel back in time to make Watchmen a good movie after all? Even if you don’t see the movie, the soundtrack is still worth buying because it features a lot of classic songs, minus the MCR song. Worth checking out if you’re the least bit interested.