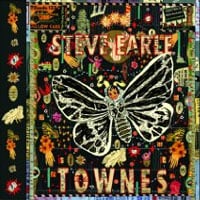 First off, it should be noted that Steve Earle is THE man. Back when he was, shall we say……wet behind the ears at the tender age of seventeen he was taken in under the drunken wing of a Texan singer/songwriter by the name of Townes Van Zandt, after the latter heard Steve cover one of his songs after being heckled by Townes. Steve once said that Townes was “A real good teacher and a real bad role model.” Steve also said “Townes Van Zandt is the best songwriter in the whole world, and I’ll stand on Bob Dylan’s coffee table in my cowboy boots and say that” and its with that in mind that brings us Steve Earle’s new album, a tribute to his friend and mentor the late, great Townes Van Zandt – “Townes.”

Steve Earle has been playing Townes Van Zandt’s music most of his life and has even covered his music on past releases, listen to the “Train a Comin'” album for a great version of “Tecumseh Valley.” But with the release of “Townes,” Earle has done his old friend a great service by ensuring his songs will get heard by a wider audience and paying tribute at the same time. As Earle said, he has being playing several of the songs featured on here for years, and some he learned specifically for this. The album’s opener is one of Townes most well known songs “Pancho And Lefty” and has in the past been covered most famously by Willie Nelson and Evan Dando, the second song introduces the bluegrass dukes back into the fold and its great to hear Steve doing bluegrass again with “White Freightliner Blues.”

The whole album is a complete pleasure to listen to, which is a fitting tribute to Townes Van Zandt, and has honestly been all I have listened to in the past week. There is absolutely no filler here folks! Oh and Steve’s first tribute to Townes (his son Justin Townes Earle and current album of the year holder!) makes an appearance here too, on a track the two of them have been doing together for years, “Mr. Mudd & Mr. Gold” – brilliant stuff. Other guests on the album include Tom Morello from Rage Against the Machine doing his best scratchy turn-table guitar on “Lungs” and Steve’s missus, the wonderful Alison Moorer Earle on “Loretta” and on “To Lives To Fly.”

All in all an excellent and fitting tribute to a legendary singer whose legend (thankfully) continues to grow. By the way, “Townes” is also available as a 2-CD set with one of the CDs being “The Basics” – several of the songs featured here without any strings, banjos etc., purely acoustic and definitely worth the extra few dollars.