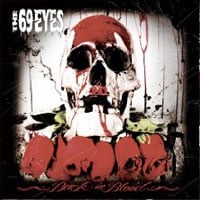 Finland’s 69 Eyes sound like Rob Zombie, well if Rob Zombie sounded like Dracula. They’ve been around since the early 90s and “Back in Blood” is their 10th release. I never knew this band existed but they aren’t that bad! I mean, the horror/Goth style is a little bit much but this isn’t a bad release.

The album theme is blood, vampires and everything spooky. I’m pretty sick of vampires right now with Twilight, Vampire Diaries, and Tru Blood. Although Tru Blood is cool because there’s lots of sex on the show. We just need a revamp of Buffy and the vampire revival will be officially in overkill mode. Songs like “Back in Blood,’ “Lips of Blood,” “We Own the Night” and “Eternal” definitely suggest this album is all about vampires. I like the rockier numbers than the mysterious, Goth singing. I just never got into Goth music before. The singing at times is hilarious because it sounds like Dracula singing. Not the Count from Sesame Street but Dracula from the movies. I wonder if the singer wears a cape and only goes out at night? This isn’t bad, but it’s just kind of hilarious that people listen to this and take it seriously. Boo!

Bottom Line: Imagine Dracula singing in a rock band and you have 69 Eyes!
Notable Tracks: Back in Blood, Dead Girls Are Easy
Overall Rating: