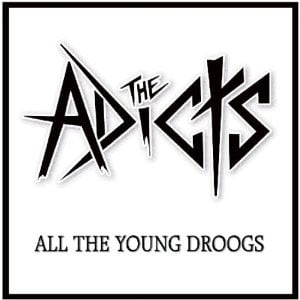 The classic punk rock group The Adicts newest album All the Young Droogs sounds like something they recorded in the ’80s. It’s been 35 years since the band has been rockin’ the white face and bowler hats and I hope they continue on because this is a decent album! It’s what you’d expect from these quirky droogs.


“Battlefield W1” is a decent first track and I like it for the most part, but the chorus is too repetitive for me. “Wild” is a good track, and so is “My Old Friend.” Those tracks sound like the old Adicts from the late 80s/early 90s to me. Catchy songs that will get stuck in your head like carousel music.

The album starts to tail off after the 6th or 7th song though and then it becomes hit or miss. “Horror Show” is a good example of a good Adicts song that makes me think of their “Chinese Takeaway” days. Most of these songs don’t necessarily scream punk rock to me but this one does. Even though some songs aren’t as good as others, I still enjoyed listening to All The Young Droogs and fans should enjoy this one too.

Bottom Line: This album has some great songs on it, but also has some tepid ones too.
Notable Tracks: Wild, My Old Friend, Rage is the Rage, Horror Show
Overall Rating:

All The Young Droogs, DC-Jam Records, punk rock, the Adicts

Music Video: The Adicts – “Give It To Me Baby”