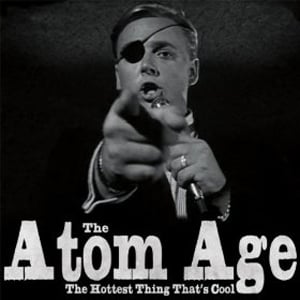 My initial thought upon starting up this album was, “holy crap…this is some furious shit”. The sound just reaches out and punches you right in the teeth…over and over again.

“The Hottest Thing That’s Cool” is my first exposure to the Atom age and the only way that I can explain the sound is if Black Flag had a love child with Snuff. It’s somewhat reminiscent of the River City Rebels, but with elements of hardcore punk more so than a rock and roll sound…even though there are some influences of rock scattered throughout.

I would usually say that with most bands adding horns adds an element of depth to their sound, but with the Atom Age, they don’t really need the horns…they have enough depth throughout…the horns are just an added bonus. Songs like “I Hypnotize” and “Eaten Alive” have such unique, riff-heavy sounds with sing-a-long quality that the little touch of the horns in the background adds the icing on the cake. “Eaten Alive” is probably my favorite song on the album even in its’ fun simplicity. That’s what makes a sing-a-long right?

Upon further review, I’ve come to the conclusion that there is a lot to like about the Atom Age and “The Hottest Thing That’s Cool”. I’m a fan of the raspy vocals, the poignant vocals, the head banging horn-infused punk n’ roll fury, the buzz saw guitars and the powerful driving bass. If the energy on “The Hottest Thing That’s Cool” doesn’t cause you to jump up off your seat and slam dance into any and everyone around you then there is surely something wrong with you.

Bottom Line: Rock and Roll with a punk rock edge and a horn section to boot. What’s not to like about that combination?
Notable Tracks: Dig The Future, I Hypnotize, Eaten Alive, I’ve Been Thinking
Overall Rating: