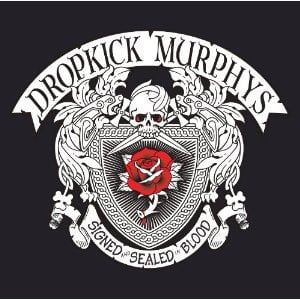 The Dropkick Murphys’ 8th full-length release is out now on Born and Bred Records. I wasn’t really that big of a fan of the Dropkick Murphys’ last 2 albums but Signed and Sealed in Blood is their tightest album since The Warrior’s Code. The Boys are back indeed!

“The Boys are Back” starts off the album full speed ahead and gets things off to an awesome start. I definitely can see them opening with this one, which will be a crowd favorite. The song reminds me of something that they might have released in their earlier career. “Prisoner’s Song” is similar in style to “I’m Shipping Up To Boston” in a way. It’s got a catchy accordion beat and sounds bad-ass. “Rose Tattoo” is one of Dropkicks’ folky tunes, and one song fans will love as well. Depending on which mood I’m in, sometimes I like the more straight-up punk rock songs. Other days I prefer the Celtic/folky tunes.

The middle of the album is the seasonal “The Season’s Upon Us” and it’s a funny song, and the music video is even more amusing. The problem when including holiday songs is it will probably be skipped over more than any other song because no one wants to listen to a Christmas song in July…well except if it’s “Fairytale of New York.” “Don’t Tear Us Apart” is a stand-out because it sounds a bit different than what Dropkick Murphys are known for. I love the intro with the old-timey piano (or whatever it’s called). “Out of Our Heads” is another highlight for me. The song will get stuck in your head, but not in a bad way. “End of the Night” is the last song on the album and is a slow sing-along type of song. It’s okay but they probably should have finished with “Out of Our Heads” or “The Season’s Upon Us.”

My problem with The Dropkick Murphys’ last 2 albums I guess is their sound started to get more muddy. Like everyone playing their instruments all at once kind of feeling but Signed and Sealed in Blood doesn’t have that at all. The music is tighter, harder and better! The new album doesn’t break new ground per say but it’s one of the better Dropkick Murphys albums!

Bottom Line: Their best release since The Warrior’s Code!
Notable Tracks: The Boys are Back, Prisoner’s Song, Out of Our Heads
Overall Rating: