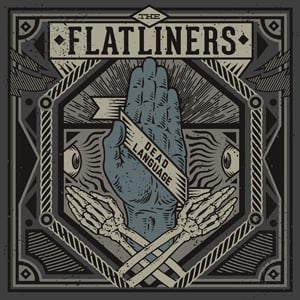 “Dead Language” sees the Flatliners returning to Fat Wreck Chords for their third release on the seminal punk label. With their days of ska punk long since gone, the Flatliners continue to hone their modern punk rock sound.

I haven’t followed the Flatliners much over the years since they abandoned their ska punk sound so that they could sound more like Against Me! and the Gaslight Anthem. I have listened to their past couple albums and saw them live a few times opening for other bands, but their sound just doesn’t resonate with me. I wasn’t much of a fan of their earlier stuff either, but the punk sound reminds me too much of the aforementioned bands that I mentioned which I am also not much of a fan of. Too many punk bands are trying way too hard to sound like Bruce Springsteen sped up times three.

Upon giving “Dead Language” a few listens, my opinion is somewhat the same. The Flatliners have some catchy songs with some really good guitar parts, but I find that a lot of the songs drag on for about a minute or so too long. There are some songs that are the perfect mix of speed and length like “Dead Hands” and “Quitters”, but songs like “Ashes Away” and “Tail Feathers” seem to never want to end.

Once again I find myself figuratively walking away from a Flatliners album with nothing to show for it. I find that they have too much in common with Against Me and the Gaslight Anthem for me to get any semblance of enjoyment out of the listening experience. There just weren’t any songs that keep ringing in my ears after the fact. I may be in the minority here as usual, but I’m going to pass on any future listens of “Dead Language”.

Bottom Line: If you like Against Me! and or the Gaslight Anthem then you’ve heard this album before and are sure to enjoy it.
Notable Tracks: Dead Hands, Quitters
Overall Rating: