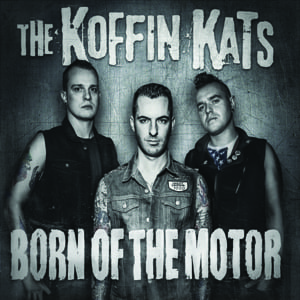 “Born of the Motor” is the seventh studio album by the Detroit-based misfit punks and it’s one hell of a furious ride.

I know that I’ve heard of the Koffin Kats before, but “Born of the Motor” is the first full length that I’ve ever actually had in my possession. It’s a shame because I’ve definitely been missing out.

The Koffin Kats are labeled as a psychobilly band, but their sound is much more multi-dimensional than that label gives them credit for. There is the obvious Misfits influence with not just the vocals, but with the horror punk and sci-fi punk songwriting. There are also some metal influences that rear their heads now and again and you can’t discount the country influences that get lost with a lot of modern psychobilly bands.

The Koffin Kats have been making music for well over a decade and this album is obviously a product of their experiences and experimentations. It’s fun and refreshing to hear a psychobilly band that doesn’t play the same two songs over and over again. I was pleasantly surprised by the Koffin Kats in general and by “Born of the Motor” in particular.

Bottom Line: A psychobilly album that breaks the mold of that genre. Variety isn’t one of the strong points in regards to psychobilly/rockabilly. “Born of the Motor” has plenty variety to spare.
Notable Tracks: Born of the Motor, This Heart (Stays on Ice), The Team, Under A Blue Sky
Overall Rating: