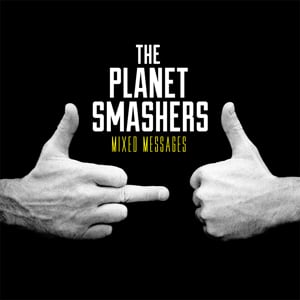 “Mixed Messages” is the eighth studio album from the skankin’ Canuckleheads from up north. With some old school charm and plenty of Planet Smashers wit, this album is far from mixed messages. One message is clear and that is that “Mixed Messages” is one fun record.

With some new Smashers sound mixed in with a lot of old school flavor, one would have to have a keen ear to recognize that this album wasn’t released between “Life of the Party” and “No Self Control”. There is such a fun, bouncy and energetic sound on “Mixed Messages” that is very reminiscent of those albums. While the last couple of Planet Smashers were great albums on their own merit, they had more of a serious tone overall. “Mixed Messages” has a classic third wave ska sound that was never really missing from the Planet Smashers released, but seems to be in overdrive with this release.

The most notable tracks for me are “Tear It Up” which is one of the newer sounding Smashers ska tracks complete with some synth-key sounds, “Waiting For the Sunset” which has a smooth and mellow ska sound backed by some female vocals…this track reminds me of the Big D and the Kids Table’s stroll sound…, “You Guys Are Assholes, Let’s Party” which is one of those classic snarky hyper-ska Planet Smashers tunes from the days of old and “What’s Your Problem?” which has a catchy chorus and a solid two tone beat.

Choosing the most notable songs on this album was quite difficult considering there are so many great tracks on “Mixed Messages”. This has definitely been one of my favorite recent releases from the Planet Smashers and one that has merited uncountable repeat listens since arriving in my inbox for review. I can’t really put my finger on it, but there was just something different about this album. The songs are just so much fun and catchy as all get out. I suppose it was good to hear something that sounded more old school, even though the Smashers haven’t drastically changed their sound over the years. I suppose that I could also just be getting mixed messages.

Bottom Line: I don’t want to say that the Planet Smashers are back because I love all their albums, but if you haven’t listened to the Smashers since last century…this album kind of sounds like that era of the band.
Notable Tracks: Tear It Up, Waiting For the Sunset, What’s Your Problem?, You Guys Are Assholes Let’s Party, Can’t Stand Anymore
Overall Rating: