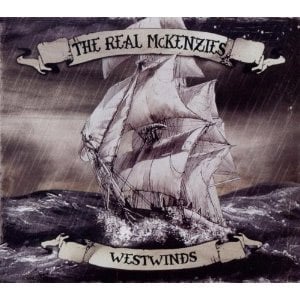 Those crazy Canadian Scots are back with their 7th studio release (not including live albums) and their 3rd studio album with Fat Wreck Chords. Their last release was “Shine Not Burn” and it was a live acoustic album. Their new release “Westwinds” is more like the Real McKenzies’ last studio album “Off The Leash” than their earlier stuff.


“The Tempest” starts off the album off and it’s a great sea shanty-style song. The Real McKenzies are known to sing a shanty or two and they do it well. “Barrett’s Privateers” is another shanty song that they do towards the end of the album. “Fool’s Road” follows “The Tempest” and is kind of a snotty Celtic punk song that pretty much says “we don’t care who you think we are.” A slower tempo track “The Message” is a track I like just because it sounds different than the rest. Not sure why, but the bagpipes bothered me on some tracks. I listen to this music a lot, but there’s only so much bagpipes I can take after awhile.

I’m not sure this album is good as their earlier albums but it’s a decent follow-up to Off The Leash. I think I still prefer their albums Loch’d and Loaded and Oot & Aboot. It’s something about those albums that I like the most. I think The Real McKenzies’ sound has matured and tightened up over the years, which is a good thing. I’m just not jumping for joy over some of the songs like I was for the other albums.