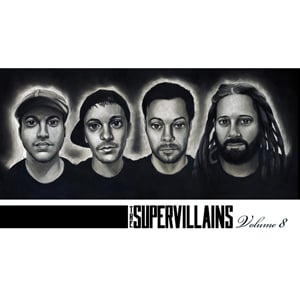 It’s only been two years since the release of the Supervillains last full length album “Postcards From Paradise”, but the band hasn’t been sitting on their laurels in that short amount of time. They have released an EP of re-recordings of all of their robot themed songs and are set to release their eighth studio album aptly titled “Volume 8” which contains new tracks, cover songs and alternate versions of previously released songs.

One would think that an album of covers, re-recordings and random singles wouldn’t quite flow together well to form a cohesive album, but “Volume 8” sounds like a great mix of their last three albums but with the more mature and driven ska/reggae influenced direction that the band is going in.

Two of the covers that I was anxious to hear on “Volume 8” were “Where Is My Mind?” by the Pixies and the Slickers “Johnny Too Bad”. Neither song disappointed. I was also curious to hear what the Supervillains had planned with one of my favorite tracks off of “Postcards…” in “Fundamentalists”. They took a dub route and seemed to expand on the song and make it eerily haunting. The addition of Antonee First Class from the English Beat adding some vocal stlyee is just an added bonus. He also appears on the new version of “Stuck In The Middle” now just called “Stuck”.

Out of the new/remixed songs I would definitely say that I really liked the new version of “Free” with rapper D.P. providing guest vocals. While most remix songs on “Volume 8” are slower versions of their former selves “Resin ‘13” has a slightly faster pace and a fuller sound thanks to the horn section from Orlando ska/rocksteady band Control This.

For fans of the Supervillains sound new or old, “Volume 8” is a great addition to their musical catalog and, not to flog the dead horse into the ground, but even though this isn’t the hypersonic paced ska punk of days gone by from the Florida four piece, I have honestly enjoyed the slight shift of pace of the last couple of albums. “Volume 8” is a great mix or the old and the new, the cover songs that influenced them as well as the ones that are fun to play. The remixes are uniquely different than the originals and it is fun to hear them in a new light. By the time this review was done with I found myself on my fourth or fifth listen. You’ll probably do the same.

Bottom Line: A fun mixture of remixes, covers and new songs that is worthy of multiple rotations
Notable Tracks: Where Is My Mind?, Free, Space, Johnny Too Bad, Fundamentalist, It Must Be True Love
Overall Rating: