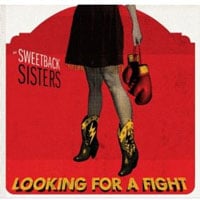 “Looking For A Fight” is basically a country music history lesson. It consists of a handful of classic cover songs intertwined with some originals. The Sweetback Sisters are a dual-female vocal neo-trad/country/rockabilly/honky tonk sextet from deep in the
heart of…Brooklyn, NY (?). Yep, you heard me right. Brooklyn, NYC. You would swear that they hail from Memphis.

I grew up listening to bluegrass and traditional country due to my grandparents. If I were to play “Looking For A Fight” for them today I’m sure that they would think that it was straight from 1955. There is a great mix of faster rockabilly sounding songs to compliment the slower traditional country ballads. The cover songs are as varied as the originals with songs appearing from Dwight Yoakam, Patsy Kline, the Traveling Wilburys and the Sons of the Pioneers.

Putting aside the timeless cover tracks, the Sweetback Sisters originals are quite good as well. The title track sounds like an early 80’s rock/country hybrid song, “The Mystery of You” sounds like a forgotten Hank Williams tune and “Too Many Experts” is a banjo pickin’, knee slappin’ honky tonk track that sounds like it should have been on an early Johnny Cash album.

The Sweetback Sisters provide a modern take on traditional country and honky tonk and one can surely tell that they have paid attention to their teachers by providing a very fun and energetic neo-country album. If you like you’re country as old as that record player in your garage, then surely “Looking For A Fight” is the right choice for you.

Bottom Line: A fun throwback country album that is by no means throwaway.
Notable Tracks: It Won’t Hurt When I Fall Down From This Barstool, Looking For A
Fight, Cowboy Ham and Eggs, Rattled, The Mystery Of You
Overall Rating: