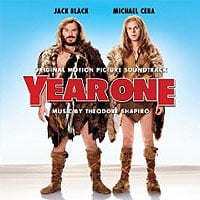 Year One is the latest comedy from Harold Ramis and Judd Apatow. The film stars Jack Black and Michael Cera as Zed and Oh. The two tribesmen travel on a journey through Biblical times and encounter a bunch of people like Abraham, Adam and Eve and other people like that. Based on the trailer, it doesn’t look that funny but I might give the film a shot when it comes out on DVD.

This CD is the film score, not the soundtrack so buyers beware of that. Theodore Shapiro seems to be the go-to-guy when it comes to the latest comedy scores. Recently, he has composed such films like Tropic Thunder, I Love You Man, Marley & Me, Semi-Pro and Blades of Glory. The Year One mixes contemporary music beats with world music and classical. So you might hear a hip-hop beat mixed in with Arabic music. If you think it sounds weird, it doesn’t. The music actually sounds pretty cool, and isn’t boring at all. Besides the Arabic mixed in with the hip hop beats, there’s also rock mixed in with Arabic. Think something you might have heard in The Scorpion King, if you actually saw that movie. Shapiro’s scores keep getting better and better, including this one. It’s the movie itself I’m worried about though.