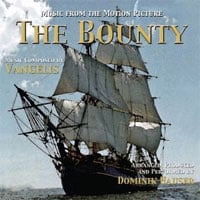 The Bounty starred Anthony Hopkins and Mel Gibson, and was directed by Roger Donaldson in 1984. It’s about the mutiny on the Bounty, and based on the book Captain Bligh and Mr. Christian. I haven’t seen the Bounty but I’d love to since the cast alone is something to watch. Besides the two I mentioned before, plus Liam Neeson, Daniel Day Lewis, Bernard Hill and Laurence Oliver!? Wow!

Vangelis has composed some interesting and unique scores like 1492: Conquest of Paradise, Blade Runner, Alexander and of course Chariots of Fire. Vangelis stands out from the rest of the other film composers because his scores are very enigmatic, elegant, atmospheric scores that sound different. He’s an electronic music pioneer basically. The ominous main title for The Bounty is haunting, but I particularly like the tracks “Cape Horn” and “Sailing On” for their pleasantness. I also enjoyed the traditional songs heard in between the Vangelis tracks as well. It gives the notion that the movie is taking place on ships and during that time period. I think my only complaint about this type of score is that it might sound dated at times. Like there is too much synthesizers or something? Other than that, hearing the score for the Bounty again was nice and makes me want to watch the movie now.

Bottom Line: A haunting, ominous score from one of the most unique film composers out there.
Notable Tracks: Bounty Leaving England, Cape Horn, Sailing On
Overall Rating: