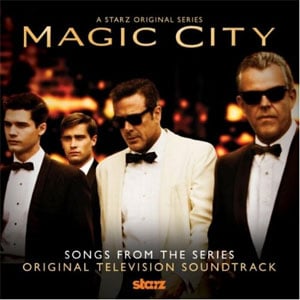 Magic City is the latest TV series on Starz. Originally I thought it’s about Las Vegas, but that’s been done to death. This time it’s set in the 1950s in Miami and is about hotel owner Ike Evans. The series stars Jeffrey Dean Morgan, Olga Kurylenko, Steven Strait, Danny Huston and others. The series was picked up for a second season already so that’s a good thing. Maybe I’ll check it out then since that’s my rule with watching new shows: has to be picked up for another season.


The soundtrack is a good one as it features music from Bo Diddley, Frankie Avalon, Tito Puente, Albert King, Johnny Otis, Ray Charles and more. The album starts off with the classic Bo Diddley song “Im a Man.” The next track is a exclusive recording of “Tenderly” by Patti Austin. I haven’t seen the show but a lot of the music makes me think of that era. Since this show deals with the mob as well, I can definitely get that sense from listening to the music. It’s like putting on the soundtrack to Goodfellas and knowing it deals with the mafia. It’s just got that vibe about it. For the most part, this soundtrack features oldies and some bluesy songs as well. It’s a very good soundtrack and makes me want to watch the series to see if it’s just as good.