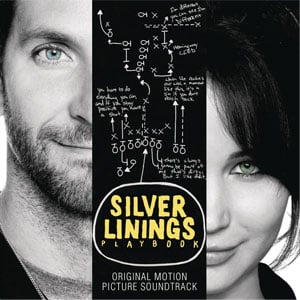 Garden State is to The Shins as Silver Linings Playbook is to the Lumineers. Funny thing is, the band is nowhere to be seen on this soundtrack. The movie has been overplaying The Lumineers’ “Ho Hey” song to death, yet they don’t even have it on the soundtrack. I really don’t get the album selections of these soundtracks sometimes. Not like it really matters to me to be honest, I’m already sick of hearing it.

The soundtrack opens up with a Danny Elfman score track for the movie, which sounds nothing like the typical Elfman score music. It’s very contemporary, with lots of humming and hooing and ahhhhss. If that makes any sense. I haven’t seen this movie yet but apparently there is a lot of music missing from the soundtrack, besides The Lumineers. Bands that are on this soundtrack include Stevie Wonder, Alabama Shakes, Les Paul & Mary Ford, CrabCorps, Eagles Of Death Metal, Bob Dylan & Johnny Cash, Rare Earth and others. Besides the obvious choices (Wonder, Dylan, Cash, Rare Earth, Les Paul/Mary Ford), I wasn’t too crazy about this soundtrack. I’d probably like this score by Elfman more than the music choices on this soundtrack.