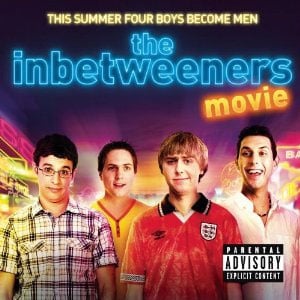 The Inbetweeners was a British comedy sitcom from 2008-2010 and now it’s a movie I guess? The movie is about a group of teenagers that go on a trip to the Greek Islands for holiday. Think American Pie, but only a bunch of Brits instead.

The soundtrack for the movie contains 27 tracks, with some dialogue from the movie mixed in. Some of the bands heard on this compilation is Miles Kane, Kesha, The Vines, Axwell, Deer Tick, Sean Kingston and others. The soundtrack also features exclusive music from Mike Skinner of the Streets. A lot of the music is poppy, radio dance music which is typical crap you’d hear in a teen comedy. Based on the trailer, the movie looks kind of funny but can’t say it’s original. As long as there’s no prom in the movie, the ultimate teen comedy cliche. If you see the movie and enjoy the music, then be sure to get the album. I don’t like this music but the movie looks like it has potential.