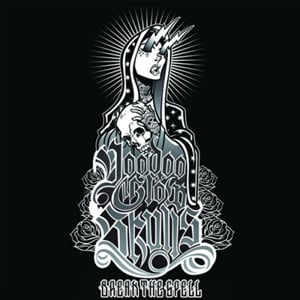 Those wacky SoCal ska punkers are back with a new album after a lengthy five year hiatus. “Break The Spell” is the Voodoo Glow Skulls ninth full length album and, with the sound of it, one could possibly mistake it for their second or third.

Upon first listen, I seriously had to double check to make sure that the songs on “Break the Spell” weren’t re-records. The Voodoo Glow Skulls have definitely gone back to their early roots on this album. I’m not saying that they have strayed that far from them in recent years but their Victory Records albums have a different overall sound and feel to them. “Break The Spell” has a faster, crazier ska/punk sound throughout that is reminiscent of “Firme” and “Baile de Los Locos”. The songs just have so much more energy than their recent material. I could swear that “Bro Truck” and “Long Road Home” were on “Who Is, This Is?…or were deep cuts from that era.

There is a good variety of that classic VGS sound on skankable songs like “Police Knocking On My Door” or “Knucklehead” and you also get your furious punk fix from “Haunt You” and “Bro Truck”. One of my favorite tracks on the album is the closing track “The Resurrection”. One could consider it an “epic” Voodoo Glow Skulls song. It starts off with a chilling guitar riff backed by the drums and bass, the horns kick in and it turns into a relentless punk song, has a ska breakdown and then kicks into an even higher gear. The lyrics deal with raising your consciousness and awareness of those around you. The message is to take yourself to a higher level. That’s one of the things that I like so much about the Voodoo Glow Skulls over the years…they have distanced themselves from songs about beer and partying and have focused on social awareness, unity and, to some extent, political activism. The band has matured lyrically, and personally I think that this fits more with the ska-core sound of old.

Longtime fans of the band should like this album no matter what but for those that have strayed from the path of the Glow Skulls, pick up this album, dust off your pencil thin checkered suspenders, roll up your Dickies and skank and thrash like the old days.

Bottom Line: One of the best Voodoo Glow Skulls albums in the past ten years. The songs are fun and there is an energy that just oozes from “Break the Spell”.
Notable Tracks: The Resurrection, Haunt You, Bro Truck, Unlucky Bastard
Overall Rating: