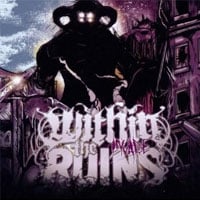 To metal heads, Within The Ruins’ Invade album on Victory Records might not turn any heads but they definitely stood out from the bunch of metal bands I’ve been listening to & reviewing lately. “Technical” metal is a term being thrown around and I can see that.


I’m not sure where the word technical metal came from but maybe it’s just they are very precise with their playing. The drumming has a lots of double bass drum playing (I think?) and the guitars sound like they are from the Trans-Siberian Orchestra. That’s not a dig at all…honestly. The tempo is super fast, to the point that it’s unbelievable that humans are doing it. The vocals are great and sound tough; something you want to hear in a metal band. Screaming will only take you so far in the scene. The vocals remind me of Jamey Jasta’s from Hatebreed a little.

I didn’t know what to expect when putting this on but I really liked this album. They guitar playing really impressed me a lot. I found myself tapping my fingers alone, pretending to play the guitar for songs like “Versus,” “Ataxia” and “Oath.”

Bottom Line: Highly talented metal band that should at least be heard once.
Notable Tracks: Versus, Invade
Overall Rating: