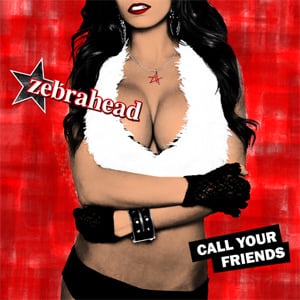 “Call Your Friends” is the tenth studio album for the SoCal pop punkers and follow a four year trend of Zebrahead releasing and album in an odd number year. Useless fact, I know.

Honestly, it’s been quite some time since I’ve listened to Zebrahead…probably shortly after the departure of their co-lead singer Justin Mauriello hence the change in sound to more punk/pop punk than rap punk. I’ve seen them live a few times since then, but they were still playing older songs. Hell, I think I saw them paired with Reel Big Fish at every single RBF show in the 90’s. I would have to say that I was lukewarm on their older sound. “Call Your Friends” contains no rap punk and is more of a straightforward pop punk album in mid-90s form. Actually, I’m reminded somewhat of the first couple of Sum 41 albums because there are some heavy metal influenced guitar riffs throughout most of the album. I quite enjoy that.

Having not listened to Zebrahead in quite a few years, I can say that hands down this is the best Zebrahead album that I’ve listened to. There is really a lot of good stuff going on with “Call Your Friends”. As I mentioned before, there is definitely a heavy metal influence but that’s not all there is to discover. You may want to label this album as simply a pop punk album, but that would be an unfair assessment. There is definitely loads of pop punk scattered about, but there are also quite a few hyperfast punk songs that are reminiscent of the Suicide Machines hardcore years (“Don’t Believe The Hype”) or “Born To Lose” which has so many WHOAs that the Offspring would be proud.

While it may not be groundbreaking or all that original in regards to pop punk or even punk music in general, “Call Your Friends” was a very enjoyable listen. I haven’t had this much fun with a punk rock album in quite some time and it’s good to find that although Zebrahead has gone through a change in sound, they still don’t take themselves seriously and they still know how to have fun.