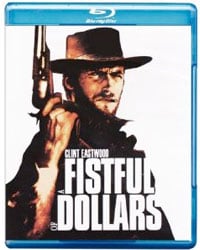 The classic Man with No Name movies A Fistful of Dollars and A Few Dollars More are released on Blu-Ray, which I thought they were before? Maybe they weren’t available as single editions and only available if you bought the entire trilogy? But anyway, if you want a nice upgrade from your DVD, Blu-Ray is the way to go!

A Fistful of Dollars starts off with a Stranger (Clint Eastwood) entering a small Mexican border town called San Miguel. The town innkeeper tells the Stranger that there is two families fighting for control of the town. The two fighting for the town are The Rojos Brothers consisting of Ramon (Gian Maria Volonté), Esteban and Don Miguel and other side is the family of the Town Sheriff, John Baxter. The Stranger decides to pit the families against each other to make money and ends up getting more than he bargained for.

It’s been a few years since seeing A Fistful of Dollars but man, the bad looping and audio is tough to get through. I especially can’t stand the voice-over work for the little kid in this movie. I wanted to shoot the little crying twerp. The way the movie was shot is weird because they did their lines, and then just re-recorded it in post-production later so it’s just looks really bad. Clint Eastwood even mentioned how crazy the shooting was because people were talking during the filming, and it was distracting to him. Bad looping aside, still can’t help but love this movie and the sequels. The amazing score from Ennio Morricone, the grittiness of the movie and just how much of a badass Clint Eastwood was. I’m surprised they got away with the Rojos killing women in cold blood too. I’m sure some groups would be bitching about that if that was filmed today.

I can’t say I’m a video/audio professional but the Blu-Ray for this movie seemed pretty damn good for being a movie from Italy and filmed in the 60s. You can notice some grain and blemishes here and there, but nothing too bad. It’s still the best I’ve seen the movie to date. I honestly can’t tell if these bonus features are new or not, I believe so because the quality on some of them is in high-definition. There’s a few extras that were carried over from DVDs I believe since the quality isn’t as great. I liked watching the Christopher Frayling Archives about the various posters from Fistful of Dollars. The German ones looked funny, almost third Reich style haha.

If you’re a fan of the Man with No Name trilogy, definitely get the Blu-Ray because it’s worth the purchase!