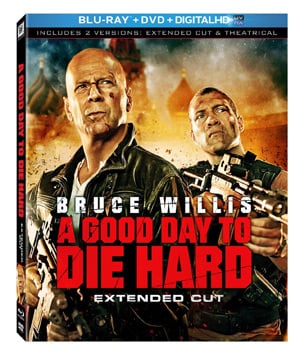 A Good Day To Die Hard isn’t that great and probably shouldn’t have been made. While the movie has a few moments that were enjoyable, I just didn’t like this film all that much.

Detective John McClane (Bruce Willis) finds out that his son Jack (Jai Courtney) was being tried in Russia for killing a mob kingpin. Even though he hasn’t spoken to his son in years, John decides to visit the country to track him down and help out. He runs into him and a former billionaire/ whistleblower Komarov (Sebastian Koch) on the run after escaping a courtroom. John tags along and finds out that Jack has been undercover for the CIA and trying to bring down people trying to kill Komarov….but there’s more to it than that.

I didn’t expect to like A Good Day To Die Hard considering I didn’t care for the 4th movie either. This one just seemed forced and a bit silly to me. His son looks like he’s 15 years younger than Bruce Willis. It made me cringe every time Jack called his Dad, “John.” One, he said it just about every line and two, I just hate when kids call their parents by their first name. Besides that tidbit , I just felt the story was a jumbled messed. I didn’t have the faintest idea what was happening or why I gave a shit. The cut I watched, which I assume was the extended cut; we just jump right into the action and we get 2 seconds of John back home. He finds out about his son and then bam, he’s off to Russia. It’s just sloppy writing.

The action is okay, like the first car chase scene or the first gun fight inside that building. Good action only takes you so far though. In the end, I thought the action was too stylized and getting into 300, slow-mo territory…which is annoying. The dialogue was amusing at times, but the chemistry between Bruce Willis and Jai Courtney is just non-existent and unbelievable that this guy is Bruce Willis’ son. Overall, I just felt A Good Day To Die Hard was trying to be more like a Bourne movie instead of a Die Hard movie.

If you enjoyed the movie, the special features are pretty damn good. There’s an hour long making-of, which was done really well. There’s some deleted scenes that should have been added into the movie. I mean, the movie is just over an hour and half with extended cut, so I think they could have added some more depth to the movie. There’s lots more in the extras but I didn’t get a chance to see them all besides the making of and deleted scenes.