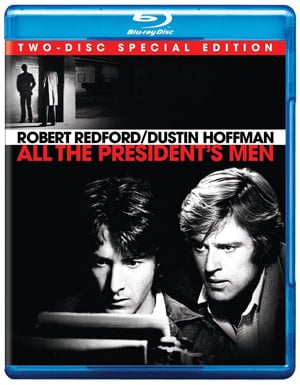 The Academy Award winning political movie All The President’s Men has been re-released on Blu-Ray to commemorate the 40th anniversary of the Watergate scandal. Doesn’t get much better when it comes to political movies!

All The President’s Men starts with 5 burglars getting caught in the Watergate building, where the Democratic National Committee headquarters is. The Washington Post assigns reporters Bob Woodward (Robert Redford) and Carl Bernstein (Dustin Hoffman) to the story and they dig up a lot more than they originally thought. They discover that the break-in at the DNC headquarters goes all the way to the very top, with President Nixon’s administration. The 2 reporters have a lot going against me but they have to gather up as much info as they can to prove to their editors and the public that they have something substantial.

Believe it or not, I’ve never seen All The President’s Men and thought it was a great film! I never knew the ins and outs of the Watergate Scandal but this movie certainly shines a light on everything. I just didn’t think the Washington Post were behind bringing down Nixon’s administration. Ah, weren’t those the days nice when newspapers actually did this thing called investigative journalism!

As I was watching All The President’s Men, I realized they don’t really make too many movies like this anymore. a political thriller that is based on a true story and gets (I’m assuming) all the facts right. Maybe Argo but that was probably hyped up to make it more exciting than it was in real life. Besides the story being compelling, the acting from Redford, Hoffman, Warden and Robards was superb. I could watch any movie with Robert Redford in it. For the longest time he looked the same for about 40 years but today he’s starting to show his age.

This special edition Blu-Ray has a new documentary that is revisited, and is narrated by Robert Redford. Plus there’s documentaries, featurettes, interviews and other stuff that I’m sure was released on previous editions of this movie.

I’m not sure this Blu-Ray is worth it if you already owned it, but there’s a new documentary on the Watergate scandal so unless you’re some extreme history buff, this might not be for you. If you don’t own All The President’s Men and like the movie, then its a no brainer.