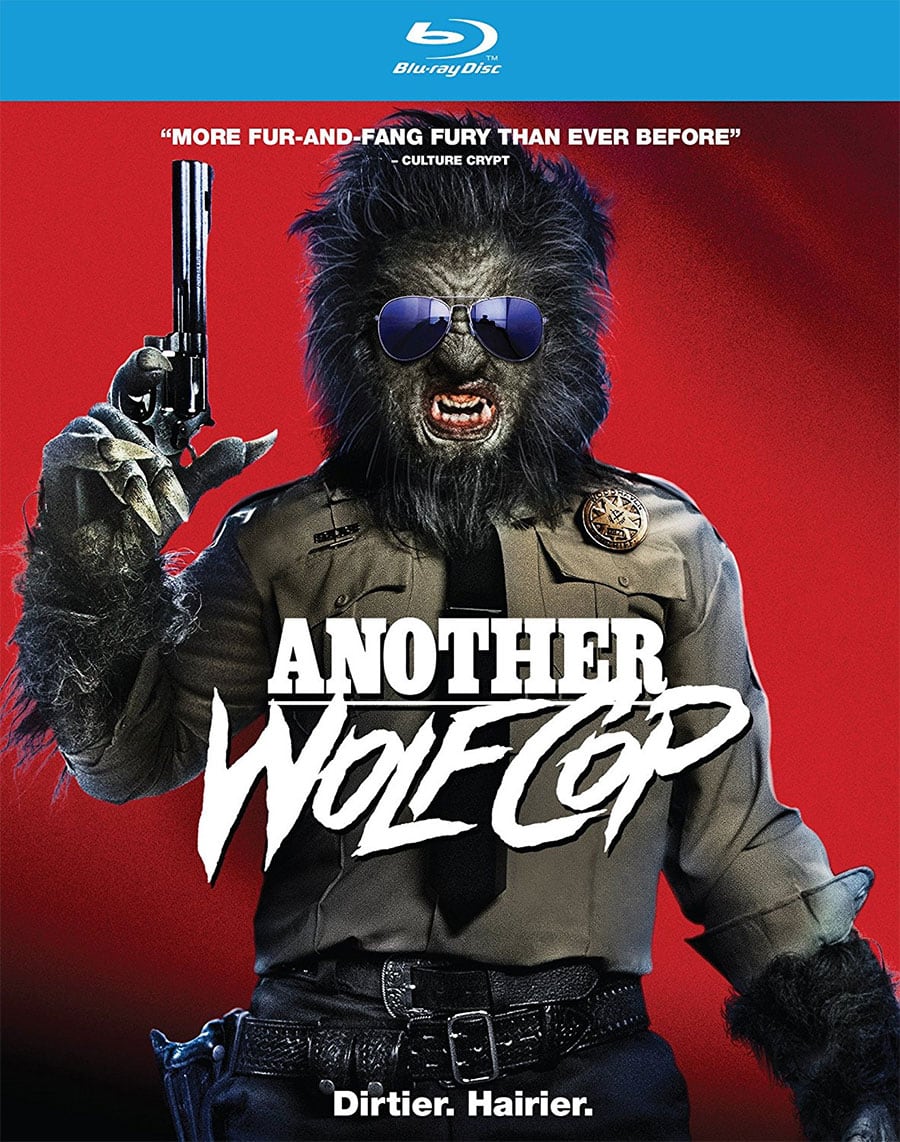 Wolfcop returns in a follow up to the Canadian comedy/horror movie with the cleverly named sequel Another Wolfcop. For those that may not have seen the first film, the plot revolves around a police officer who was inflicted with a lycanthropic curse and turned into a werewolf. Usually that adds up for a bad horror movie, but Lowell Dean’s non-serious take on a werewolf movie adds in a great humorous take, which balances out the first film.


This second film picks up where it left off. Officer Lou Garou (played by the Leo Fafard) has embraced his wolf side and is back in action fighting crime as Wolfcop. Things seem business as usual until tycoon Sidney Swallows comes to town to open a new Brewery/Hockey Arena and introduce his new Chicken Milk Stout to the Canadian town of Woodhaven. Of course sinister motives are afoot when Wolfcop stops some criminals in a box truck only to discover an old friend slimed up in a box. Capturing the feel of 1980s villainy, Swallows meets with his team of evil scientists to reveal there’s more to that Chicken Milk Stout (which by the way sounds like a disgusting beer) as Willie discovers there’s something brewing down in his stomach. When the Mayor (played by Kevin Smith) visits the brewery and the sinister plot is revealed that the Brewery/Hockey Arena isn’t what it seems, can Wolfcop’s and his crew rush in to stop the sinister plot?

Once you suspend your disbelief, because the plot is really ridiculous, it’s actually a fun movie. To some, mentioning Kevin Smith’s appearance might not be a good thing to bring up considering his ‘Yoga Hosers’ movie didn’t go over well with a lot of his fan base, but here in this appearance, it’s thankfully more redeeming. This film has more of a lighter faired Troma film meets the Howling. It was good to see most of the original cast returning. Also major bonus points for the practical effects, I can’t stress how many bad werewolf movies I’ve seen that looked like the transformation was CGI’d by some ITT Tech dropout. Was a little disappointed at the brief transformations, but unlike other werewolf movies, this actually has a plot. While I would definitely not label this as a family movie, it had far more of a less dark tone and was more lighthearted than the first. The ridiculous bathroom scene from the first film might not have been repeated here, there are enough stupid gags to fill that void.

The film itself felt like it could have been more defined, the story felt a little rushed at time, and well that helped maintain interest, certain segments of the film pass by so fast you’re left scratching your head as “wait what’s the deal with that guy again?” Again I do have to compliment their way of making the most of what they have, I’m sure this wasn’t a super big budget film, but it certainly didn’t look cheap. While the overall run time doesn’t seem too long, almost think maybe this would lend well to a Netflix series with minor episodic adventures, considering what they did with a seemingly small budget here.

Overall this is a fun spirited movie that I’m sure could fill a boring Saturday. While it seems a little off putting to be celebrating its B-Movie status, it succeeds where other movies try too hard.