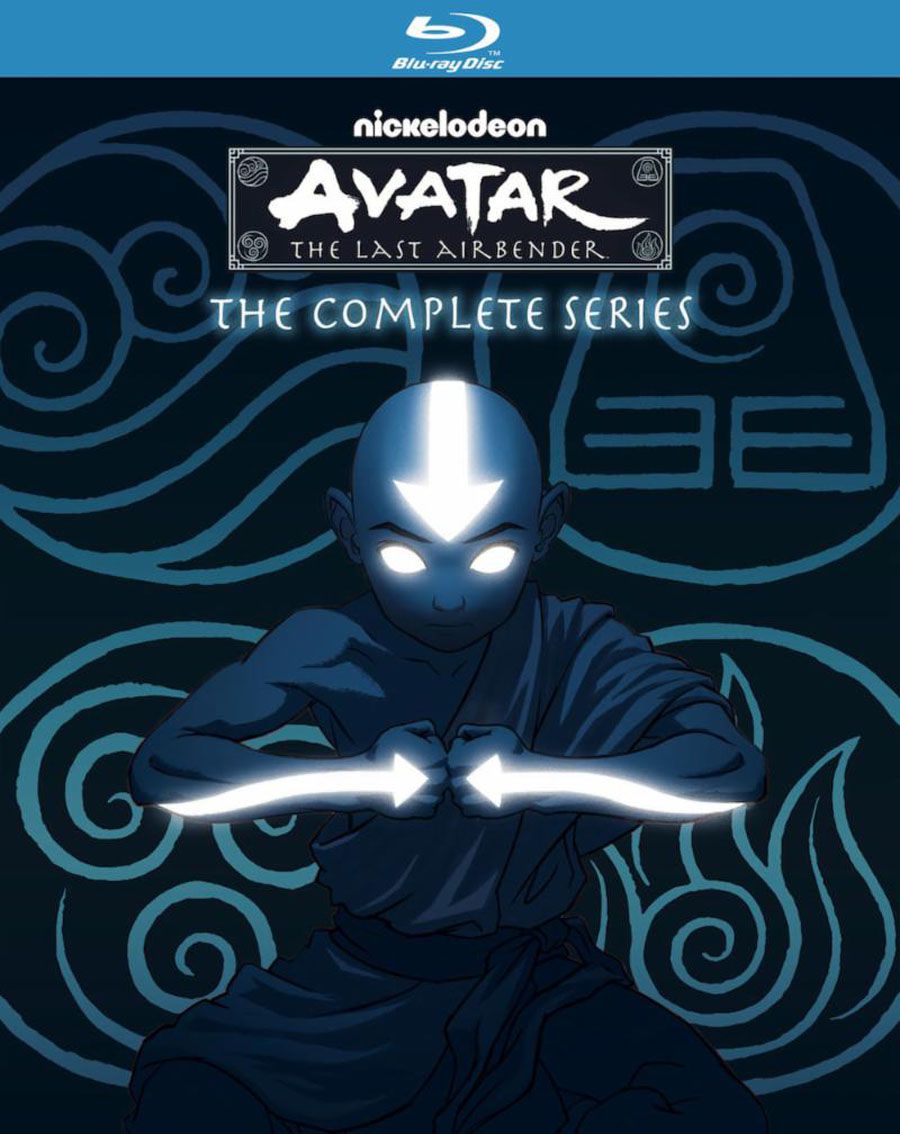 Frozen in ice for over 100 years, Aang a young airbender monk who is the last of his kind and who also happens to be the long lost Avatar…a master of all elements tasked for generations with the protection and well-being of the world…has been awoken from his accidental slumber to a world at war, a world he has failed. Now, with the help of his friends Sokka, Kitara and Toph he sets out to make things right and save the world he was sworn to protect.

Finally, finally finally ten years after the release of the series finale “Avatar: The Last Airbender” has been released on Blu-ray in high definition as it originally aired over a decade ago. “Avatar: The Last Airbender The Complete Series” contains all three “books” or chapters in one collection as well as features both old and new. In fact, there is well over 24 hours’ worth of special features on top of all 61 episodes of the show. Seeing the animation in HD is the absolute best way to watch this show. The animation is a mixture of Asian and American influences and is full of bright and vibrant color palettes and gorgeous backgrounds that look just as stunning now as they did ten years ago.

For those who may not be familiar with “Avatar: The Last Airbender” it is a show about a world that has transgressed into war due to the protector of the world and its people known as the Avatar, going missing and not being there to prevent the events from playing out. Each Avatar, at death is reincarnated in a newborn as a member of an elemental order. There are four key elements of the world; Earth, Air, Water and Fire. The Avatar must master all four elemental orders to reach his full potential. Aang is a 12 year old boy who is an airbender who upon learning of details of his training and the loss of his friend and teacher ran away from the Air Temple and his order of monks. With fate working against him he was tossed into an ocean where his Avatar state…or the full unrealized potential of his powers…kicked in and protected him in ice to prevent him from drowning.

Fast forward 100 years later and Aang is discovered by two young adults from the Water Tribe named Sokka and Kitara. Learning that the Avatar hasn’t abandoned them and that he can possibly prevent the misguided Fire Nation from achieving global domination, Aang, Sokka and Kitara embark on a mission to help Aang master all four elements and bring balance back to the world once again.

What is amazing about “Avatar: The Last Airbender” is that while its target audience was children and young adults, it is completely and absolutely able to be enjoyed by adults of all ages. There are a lot of more mature concepts and storylines that range from the loss of a loved one, the long hard path of redemption, genocide, social and class separation, love and war to name a few. Top that off with the amazing representation of various forms of martial arts, a cast of characters that are extremely likeable both hero and villain alike and one grand and epic adventure story and you have one of the absolute best animated series…or even television show of all time.

I don’t believe that there are enough words in the dictionary to explain my love for this show. I think back to watching some random episodes on TV and then to collecting the initial DVD releases of the various chapters and just how well written the episodes were or how the paths of certain characters would weave in and out of other characters’ stories then build towards a crescendo that would propel the next story arc for a portion of the season. There really wasn’t anything on television quite like it and I always felt that the main group of characters was more of a family instead of just a friends. I’ve always had the comparison in my mind of Team Avatar being very similar to Chris Claremont-era X-Men as to how they were somewhat dysfunctional but would stand and die for each other.

Whether you have any of the previous “Avatar: The Last Airbender” releases on DVD or are new to the series, this Blu-ray release is the ultimate collection to purchase. The extra features are in-depth and abundant and the presentation of the episodes is how the show should be watched as to enjoy the bright, vibrant and stunning animation in HD as it was originally shown on Nickelodeon. Then sit down with some flaming fire flakes, pull up your cabbage cart and enjoy the adventures of Team Avatar.

Features:
Behind the Scenes Kung Fu Featurette, The Making of Avatar-From Real Life to Animation, Behind the Scenes: The Voices of Avatar, Ask the Creators Featurette, Avatar Pilot Episode with Audio Commentary, Escape From the Spirit World: Animated Graphic Novel, Avatar Super Deformed Shorts, The Women of Avatar: The Last Airbender and many more.

Bottom Line: I’ve been a fan of “Avatar: The Last Airbender” since its initial run, I’ve bought every version of the show on DVD and have been waiting patiently for ten years for the complete series to be released on Blu-ray and this release does not disappoint. With the show being run sporadically on the various Nickelodeon channels, those episodes were the only way to catch it in full glorious high definition…until now. I have to say that it was worth the wait and my “Avatar” video collection is now “complete”.