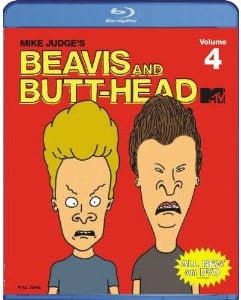 The return of Beavis and Butt-Head is most welcome in this Jersey Shore/MTV era. Not only is the show surprisingly fresh now, it’s also the funniest it’s ever been!

There’s really not much to say in terms of plot with Beavis and Butt-head. Just two morons that watch TV and make fun of it. The new show mixes the old elements of making fun of music videos on MTV, and stand alone cartoons. Now they also include making fun of MTV series like Jersey Shore, 16 and Pregnant, and other series that have nothing to do with music. If you thought B&B were hilarious when making fun of music videos, wait until you see them rip on Snooki, JWow and other parasites of the Jersey Shore! Besides the MTV shows, they also have cartoons about them wanting to be werewolves from Twilight, they get jobs at a tech support place, they spend an entire episode in the bathroom at work since they can get paid for it, and Beavis breaks the glass of the copier machine after he copies his ass on it. You get the idea.

Thankfully, the music videos and ribbing of MTV shows are included in the episodes, unlike the earlier DVD collections of the series. I haven’t thought much about Beavis and Butt-Head until they came back after all these years. In the beginning, I was very skeptical that the series would be good. In fact, the new show is by far the best it’s been! It’s kind of like when Talk Soup changed into the Soup with Joel McHale and expanded their clips with other things besides talk shows. Now, if we could only get Beavis and Butt-Head to talk over movies like Mystery Science Theater 3000!

Even the cartoons themselves are better and the animation is obviously better than it was in the 90s. Judge has had years under his belt with King of the Hill, which I was never a fan of, but that experience has helped improve B&B. Just having Beavis and Butt-Head making fun of the Jersey Shore is worth seeing. I could watch that all day long. It would just suck that I would have to watch Jersey Shore footage, but it’s almost worth it if Beavis and Butt-Head were making fun of them.

The extras for the Blu-Ray include from last year’s Comic Con, a series of quick clips of B&B calling up the cast of Jersey Shore and 1 or 2 other things. The comic con footage was cool to see because I’m never at Comic Con. The other stuff is ok, but I felt disappointed overall with the extras.

If you liked the original series and movie, then you’ll really enjoy this Blu-Ray! I can’t wait for new episodes!