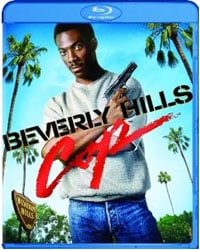 Beverly Hills Cop is one of the best action comedies of all-time, and probably one of the best movies of the 80s. The film is finally out on Blu-Ray and it hasn’t looked any better!

I would imagine everyone knows what Beverly Hills Cop is and what it’s about by now. But for the sake of the idiots out there who might not have seen this, I’ll briefly explain the plot. Eddie Murphy stars as Axel Foley, a Detroit detective who wasn’t always a cop. One night Axel meets up with his best friend who got out of prison recently. The end of the night, his friend is killed by some guys and Axel gets knocked unconscious. Clues to his death lead to Axel going Beverly Hills, where his friend Mikey was working. Without the consent from his boss, Axel goes to California to investigate and find out who was behind the crime. He quickly find out that Beverly Hills does things differently, especially the police department. Eventually, he teams with straight-laced officers Taggart (John Ashton) and Rosewood (Judge Reinhold). Together they try to find out that Mikey’s death is just the beginning of things.

Every time I watch Beverly Hills Cop, it makes me want to watch the other movies as well. Sure, the third movie wasn’t as good but it was still entertaining. I almost like Beverly Hills Cop 2 the best. If they did it right, I’d love to see a 4th movie with some of the original cast coming back. The movies won’t be the same if they don’t have Judge Reinhold and John Ashton in it. Their chemistry was missing in the third movie, but the first two movies, it was excellent. At the time, there wasn’t too many movies like this but now there a dime a dozen. Eddie Murphy proved 48 Hrs. and Trading Places weren’t just flukes in that he was a star. This movie just skyrocketed him to fame and rightly so. Besides the acting, just the overall story, jokes, and the action is what makes this a very successful action/comedy. Beverly Hills cop walks the thin line between comedy and action, where as some other movies teeter the other way and things feel out of place. Not with this movie.

The Blu-Ray looks pretty damn good considering this was released in 1984. I didn’t notice too much grain or anything like that. The extras are the same as the DVD releases, but at least they decided to include that stuff on here. I’d rather they did that than nothing at all. That way if fans that owned the DVD, can upgrade to the Blu-Ray. I think the movie is worth upgrading because it looks great on Blu-Ray.