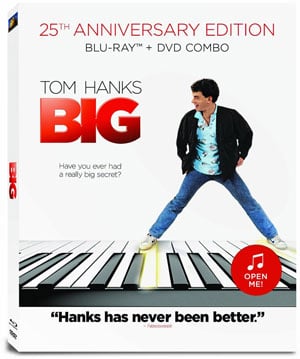 Has it been 25 years already? Time really does fly! It’s been several years since last seeing Big but I don’t remember it being this dramatic or depressing. Big is still the best body swap movies from the 80s.

The movie is about a 12 year old kid Josh (younger version is played by David Moscow) from NJ who wants to be big and have girls like him back. He wishes to be big to some creepy fortune teller Zoltar machine (and it’s not even plugged in). The next morning, he wakes up and he’s an adult that looks like Tom Hanks. His Mom gets freaked out when this strange guy is in their house and runs away. Josh convinces his best friend Billy (Jared Rushton) he’s now an adult and hatch a plan to wait it out until the Zoltar machine pops up again. Since Josh is an adult, living in a flophouse in Manhattan, he has to get a job. He gets a job at a popular toy company and quickly climbs the corporate ladder since he’s a man-child and all. Josh begins to forget what it’s like to be a kid and Billy starts to lose his best friend.

I remember seeing Big when it came out in theaters in the 80s, and I don’t really remember the movie being such a downer or depressing. I never saw the extended edition of the movie and it certainly adds more dramatic things to the movie. The whole Josh is missing and being kidnapped thing is basically a downer and I never really realized what was going on when I was little. The whole movie is suppose to be a comedy but there are a lot of serious stuff in it. The other thing that never sunk in was Elizabeth Perkins characters basically slept with a 12 or 13 year old kid. Talk about creepy! Well…great for Josh, sucks for her.

With the negatives out of the way, I still like this movie a lot because Tom Hanks is excellent in it. There’s also a lot of fun toy scenes in it and basically put FAO Schwartz on the map for me and a lot of other kids growing up. I always wanted to play that giant keyboard and wander around the Lego section at the store. Not only that, but I wanted that job and apartment that Josh had. Play with toys all day and then have a huge NYC apartment?! Sign me up!

Like I said earlier, this 25th anniversary features both the theatrical and extended edition, which is about a half hour longer. I never saw that one before but I actually think I prefer the theatrical. The extended scenes almost makes this movie a drama. It contains more scenes of Josh running away from home, being scared in his shitty apartment in NYC and calling up his parents when he has a tummy ache. I liked Big when it was light-hearted and fun, not this oh I miss my parents and scared of being an adult stuff. Maybe I just never got that as a kid.

The Blu-Ray also features a bunch of extras like deleted scenes, commentary, and a couple of featurettes. Big looks good on Blu-Ray but there is some noticeable grain throughout the movie. I still think it’s worth owning if you enjoy the movie and want to own it.