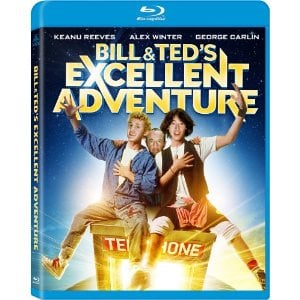 Excellent! Well, I could just type that one word review but I’ll go into this a little further. The late ‘80’s classic is on Blu-Ray for the first time and I’m loving it! I’ve been meaning to watch Bill & Ted’s Excellent Adventure again so doesn’t get much better watching it on Blu-Ray!

Bill & Ted’s Excellent Adventure is about two not-so-bright high school students Bill (Alex Winter) and Ted (Keanu Reeves) who are too busy trying to form the ultimate rock band called the The Wyld Stallyns then past History class. They are visited by a guardian angel of sorts from the future named Rufus (George Carlin). He tells them they are important music figures in the future and they need to pass their history class’ final exam. So he equipments them with a time-travelling phone booth to observe history for the report. They just have to do it before their time is up with their History class & exam.

The amount of time I watched Bill & Ted are uncountable for me but its a lot. The movie is such an ‘80s classic, that whenever it was on TV growing up, I was watching it. So many quotable lines and memorable scenes. “Want a Twinkie, Genghis Khan?” I love all the scenes where Bill and Ted gather up historical figures in the phone booth, but I especially love it when Napoleon goes to a water park and the rest of the historical figures visit the local San Dimas mall. Seeing Genghis Khan be a badass in the sporting goods store and Billy the Kid and Socrates trying to pick up women is some funny shit! I wished they picked up more historical figures, or better yet, had a sequel that was more like this movie than the pile of crap that was Bogus Journey. I really hope they make the next sequel (they have a script and director!) more like Bill and Ted’s Excellent Adventure. Make it be that Bill and Ted’s kids are failing and going through the same stuff they did, and they help them out with the time travelling phone booth. Sure, it will be recycled stuff but could be very funny if done right.

But anyway, the Blu-Ray for Bill & Ted’s Excellent Adventure looks great. There’s some graininess to some of the scenes but it’s a movie from the 80s so what do you expect. This is still the best you’re going to see the movie as of right now. The special features are featurettes that were on previously DVDs, but at least they were included on this.

Obviously if you’re a fan of Bill & Ted’s Excellent Adventure, you should pick this one up.