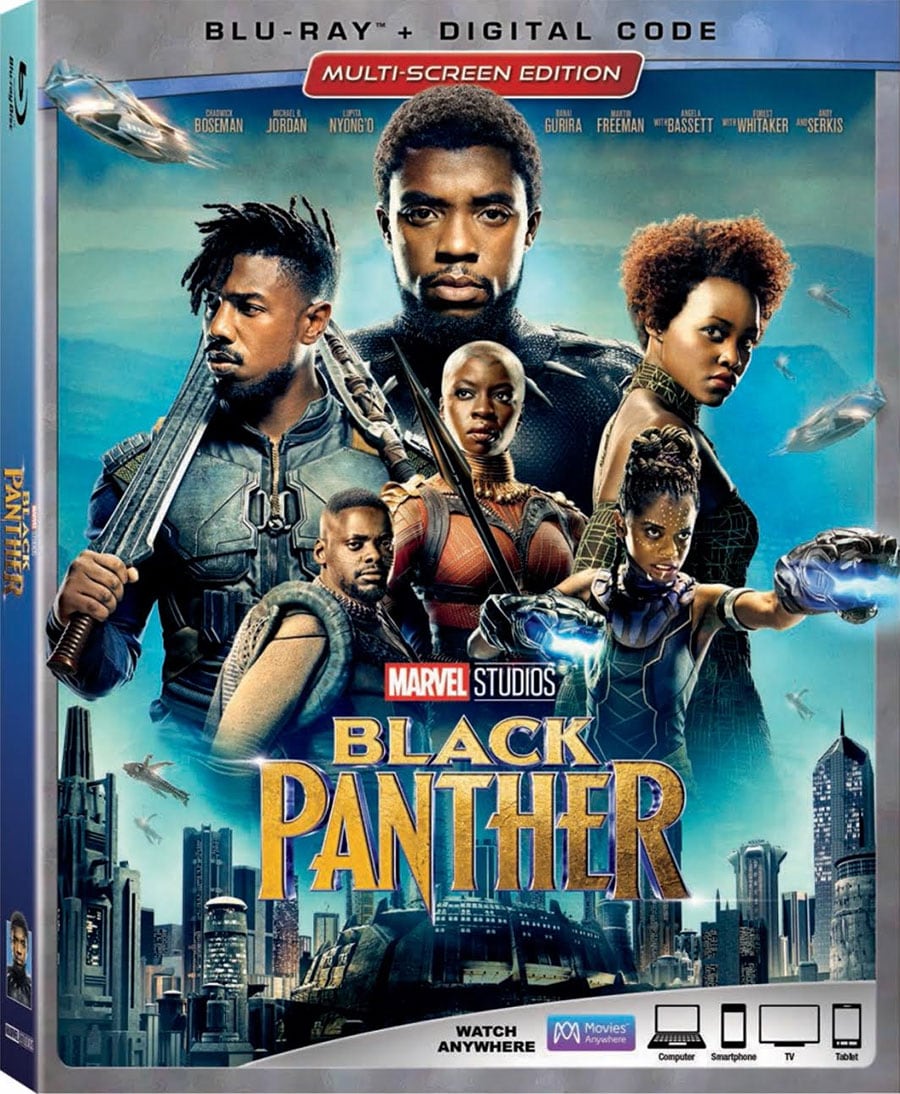 One of the most popular Marvel movies to date is now on Blu-Ray, DVD and Digital HD and just like the box office, this movie is sure to fly off the shelves. Black Panther is a great movie and a different kind of superhero movie that were used to seeing. Plus, it features one of the better villains in the MCU.

I’m sure you’ve seen Black Panther but I’ll try to summarize the plot quickly so I can get into what I thought of the movie. After the events of Captain America: Civil War, Prince T’Challa (Chadwick Boseman) is to be sworn in as King of Wakanda. T’Challa has many things on his plate: grieving for his father, dealing with arms dealer Ulysses Klaue (Andy Serkis), who has been causing headaches for Wakadans for 30 years and having his ex-lover Nakia (Lupita Nyong’o) back in his life to attend his ceremony. Things seem like they are going smoothly until they don’t. An unexpected family member returns to Wakanda to take on T’Challa and create havoc in Wakanda.

Black Panther is a great movie and I’m sure it’s a lot of people’s favorite Marvel movie now. I still prefer the first Guardians, Captain America trilogy and the Avengers movies. I honestly don’t know where I would rank it if I had to. I liked so many other Marvel movies better but that’s not to say I didn’t like Black Panther. The movie was one of the better origin stories without it being an origin story, if that makes any sense. You got enough backstory but glad they didn’t show everything from the beginning like they have in the past for other Marvel movies. I really liked Ryan Coogler’s approach and style, which I think is one of the reason why this movies succeeds in so many ways.

Black Panther actually had one of the best villains in the entire MCU, aside from Thanos and Loki. Killmonger’s motivation was justified and it was a breath of fresh air that he just wasn’t out to destroy the world. Just upend Wakanda and destroy T’Challa basically. Chadwick Boseman was excellent of course, and picked up where he left off in Civil War. If he’s not good, this movie doesn’t work but obviously he nails the part. I almost felt that Letitia Wright as T’Challa’s younger sister Shuri stole the movie though. She was definitely a highlight for me and her banter between T’Challa was so good. Danai Gurira was awesome, and a badass in a lot of the scenes. That’s not surprising at all since she’s used to playing a badass on the Walking Dead. Can’t really complain about the casting because they pretty much had every amazing African American actor in the movie. Well, I guess they could have used Denzel Washington, Morgan Freeman, Sidney Poitier, Halle Berry, Whoopi Goldberg, James Earl Jones, etc. etc. Hey, there will be sequels so hopefully they can get some of them in the next few movies.

Black Panther itself felt very different than the other Marvel movies but in a good way. The special effects were good for the most part but some scenes that could have been done better. Not sure how they would have handle some of it, or used more practical effects. The SFX didn’t really take me out of the movie too much but thought could have been better in areas. Thought the action, like the opening Black Panther scene, South Korea fight and car chases, and the end scene were all excellent. I just loved when Okoye threw her wig at a guy and used that as a weapon. The spear work was really cool by her. There is humor in the movie (mostly by Shuri) and it had the right balance for this kind of Marvel movie.

The Blu-Ray and Movies Anywhere bonus material contains featurettes, gag reel, audio commentary, deleted scenes and more. The gag reel was about 2 minutes and pretty much Lupita Nyong’o goofing off and dancing on set. The featurettes are broken into separate categories but equals about half hour give or take. One featurette talks about getting Black Panther his own movie after Civil War, one about Wakanda, the women of Wakanda, the tech, and other things like that. There’s also some deleted scenes, a quick behind the scenes look at the next Marvel movie Ant-Man and the Wasp, a roundtable discussion and lots more that I haven’t even checked out yet. I heard Ryan Coogler’s commentary is really good so like to circle back around to listen to that soon.

Black Panther is different kind of Marvel movie and in a good way. Lots of powerful characters, an interesting story and a cool location where the movie takes place. It should please fans on all fronts and judging by how much money it has made so far, you already know that. It’s not my favorite superhero movie but one of the better overall movies that Marvel has put out.