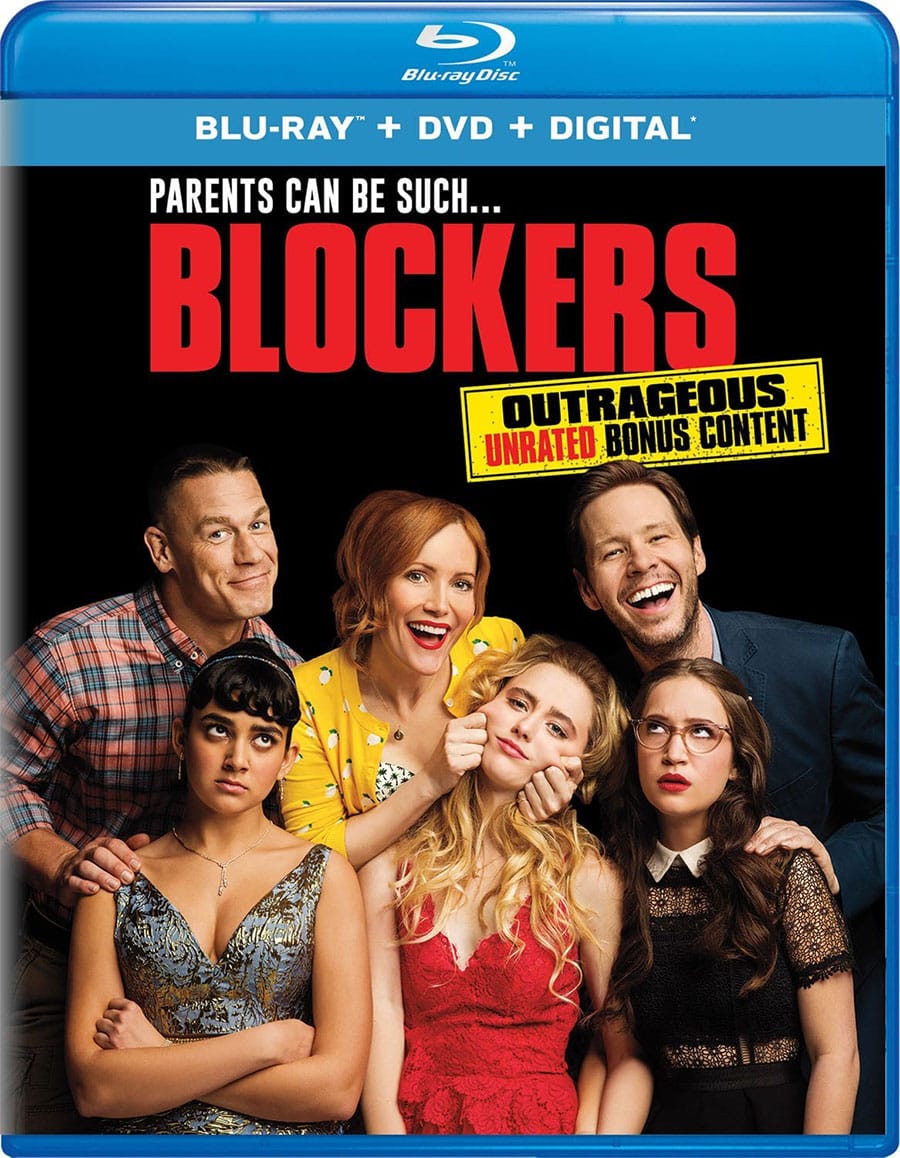 I wanted to see Blockers in the theaters but since it’s not Star Wars or Marvel, I didn’t get my lazy ass off the couch to see it. It’s now available on Blu-Ray, DVD and Digital HD and worth watching if you like raunchy comedies. It’s not all raunchy and does have some sweet moments to it as well.

All you need to know about the plot for the movie is it’s about 3 parents, Lisa (Leslie Mann), Mitchell (John Cena), and Hunter (Ike Barinholtz) discovering their daughters’ sex pact to lose their virginities at the prom. They decide to track down their kids and be cockblockers before they do the deed.

We don’t normally get these type of comedies too much anymore, at least as much as we used to. The genre seemed to have sizzled out so Blockers is a breath of fresh air in a way. Even though there are some cliches in the movie, it’s still a funny one. Some of the cliches would things like high school teens centering their life around the prom like it’s the most important thing in the world. Also, getting laid after the prom like that’s the most important thing. Am I the only one who didn’t put too much stock in the prom, besides the fact I was a loser and couldn’t find a date? That’s besides the point, but would like these type of movies not to have the prom be the focus in every damn one of them. I guess the movie is slightly different this time because it’s from a female’s perspective and not just about a bunch of white teens looking to score. We also get a different perspective from the parents as well, which makes thing funny. Are they overreacting and being too involved in their daughters lives? Hell yes but it still makes for a funny comedy.

Leslie Mann was perfect as single mother Lisa and she provided the right comedic punch and wit. John Cena keeps continuing to impress me with his comedic chops and has been a scene stealer in a few comedies now. The beer chugging scene was hilarious as well as other stuff he did. Ike Barinholtz was his typical self in this one, but also the voice of reason most of the time. I liked the movie, in the end, let the girls decide if they wanted to go all the way. It’s not really a new idea, some of that was explored in America Pie but from the guy’s perspective. Besides the beer chugging scene, I thought the puke scene was good as well as the parents of Austin’s having their sex games.

The extras include deleted scenes, gag reel, line o rama, a few featurettes and the other usual stuff you might be see in a comedy Blu-Ray. The line o rama and gag reel were the highlights for me, especially line o rama. That had me in tears from laughing from all the different lines the cast was saying. There’s also a featurette on how they did the puke limo ride and was funny to see all the crew testing out different ways of doing the puke. I probably would have puked from seeing the people fake puke if I was on the set.

Blockers is your typical raunchy comedy, but with heart and from different perspective than just teen boys trying to get laid. You get the female perspective and you get it from the paranoid, scared parent. The movie is really funny and I laughed a lot, and isn’t that what matters when watching a comedy?