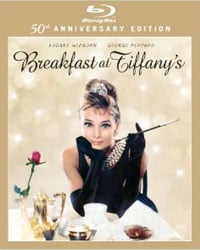 In celebrating it’s 50th anniversary Breakfast at Tiffany’s is now available on Blu-ray. Breakfast at Tiffany’s is one of my favorite classic movies, adapted from the novella written by Truman Capote. Watching this movie is always such a feel-good experience for me. The movie is very innocent compared with recent films and the main character Holly Golightly (Audrey Hepburn) is extremely quirky and
fun. 50 years later, I think you can still find a version of her eye lash adorned sleep mask online. It’s classic movies like this that remain entertaining and relevant decades later.


The plot follows Holly as she searches Manhattan for a millionaire husband. Paul Varjak (George Peppard) a handsome, struggling writer moves into the apartment upstairs from Holly and gets swept up in her chaotic world. The two share their loneliness which grows into a friendship and eventually turns to love. Not without some resistance from the Holly, of course. One of my favorite scenes is when Holly and Paul go into Tiffany and Co. and try to buy something for only $10. All it ends up getting them is an engraving. Another great moment is the party scene in Holly’s apartment with it’s amusing atmosphere and other
eccentric characters.

In this Blu-ray addition I noticed the beauty of the cinematography in this film which previously wasn’t as obvious to me. I know they’re the same camera angles they’ve always been, but seeing them in such a crisp format calls this to attention more than it did before. Holly Golightly will always be my favorite part of Breakfast at Tiffany’s. Originally, Capote wanted (gasp) Marilyn Monroe to be cast in the role, but I could not imagine it played by anyone else better than Audrey. Her character’s bizarre nature always makes me smile, from her bathtub that’s been remodeled into a couch to her adorable cat who she names Cat. It’s all a bit silly and there’s something very Alice in Wonderland about the world she makes for herself. I highly recommend this movie to anyone, but especially to those who are a fan of Audrey or the classics.

Special Features in this Blu-ray edition offer so much behind the scenes information for fans of this classic. It’s definitely worth watching!

Features:
Commentary by Producer Richard Shepherd
A Golightly Gathering
Henry Mancini: More Than Music
Mr. Yunioshi: An Asian Perspective
The Making Of A Classic
It’s So Audrey: A Style Icon
Behind the Gates: The Tour
Brilliance in a Blue Box
Audrey’s Letter to Tiffany
Galleries
Original Theatrical Trailer