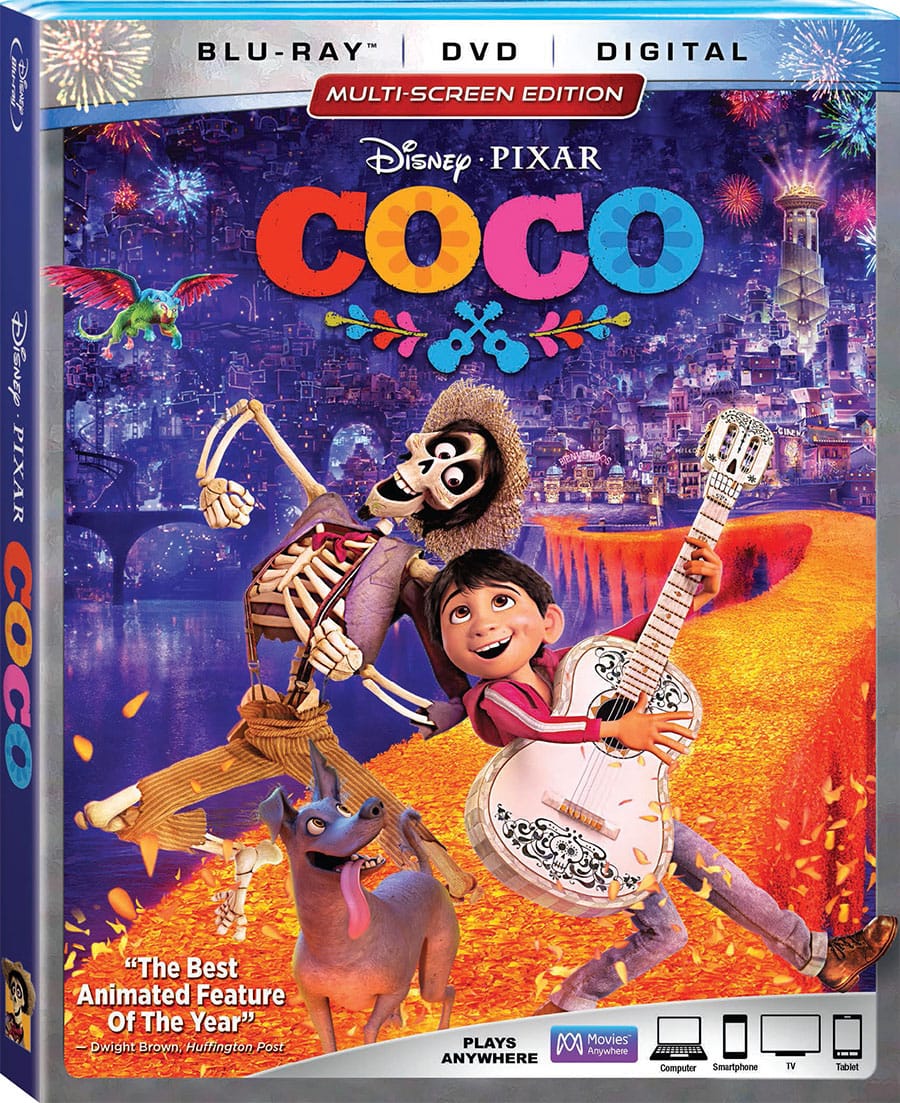 Everytime I watch a Pixar movie, I always say to myself: how do they always make such amazingly complex and original stories? Coco is another winner and terrific movie about life, family, death and everything in between. Bring the tissues, you’re going to need it.

An aspiring Mexican musician, Miguel (Anthony Gonzalez), wants to be able to just play music but his family doesn’t approve. Miguel’s Great-Great Grandmother and her daughter Coco were left by her musician husband at the time; so music was banned from the family. While Miguel tries to get into talent show without a guitar, he finds one at Ernesto de la Cruz’s mausoleum. Ernesto is the most famous Mexican musician turned actor, and who Miguel thinks is a relative. After stealing the guitar, he becomes invisible to the living and is seen by his dead relatives visiting the Day of the Dead celebrations. His family members try to find a way to get him back to the living before it’s too late. While on the adventure, he comes across a charming former musician Hector (Gael García Bernal) who teaches him about tradition and family.

I’ll admit, I didn’t know what to expect when I saw the trailer for Coco originally. I was like eh, I’ll wait for video. I felt the same way for Up and they both ended up being one of my favorite Pixar movies. It’s probably a good thing I waited since I was weeping mess during parts of the movie. Like with most Pixar movies, the story is original, unique and showcases an area of the world where some people might not know much about. I think it came out at the perfect time, especially when President DipShit keeps attacking Mexican and immigrants.

The gist of the story is: family. How important it is to keep your family close, stick to family traditions and sometimes, having to put up with your family’s crazy rules they pass down. Part of the reason why I was crying, not to mention that it was just a sweet moment, was how Miguel and others celebrate their lost ones. They have shrines and photographs hanging up on the wall and that plays a huge part in the story. I never realize that I have been doing that since losing my Grandparents and my Dad. My fridge is, in a way, my shrine to them.

Some people saw the twist coming but for some reason I didn’t. Obviously I won’t say what it was but was expecting something else. The music in the movie was good, and not overly annoying like some Disney movies can be with it. Pixar always uses the music effectively and the score by Giacchino was great, along with the singing from the cast. Pixar always cast children that aren’t obnoxious and they sound sweet, this time it was Anthony Gonzalez. Gael García Bernal and Benjamin Bratt were both good, as was Alanna Ubach. You might know her from earlier work in Beakman’s World but she’s a singer, voice-over actress and more. It’s good to see that Pixar used a lot of Mexican and Mexican descent actors for this, plus they had a lot of Mexican crew as well.

It’s a no-brainer that the animation was stellar. So vibrant and colorful! The landscapes get more realistic with each movie the release. The looks of the characters were excellent too. Thankfully, I don’t think the skeletons were scary looking for little kids. My 2 year old didn’t get scared but he wasn’t really watching the movie. Give it time, I’m sure he will just like Moana. The movie is for children and adults, but the look of the skeleton shouldn’t frighten children. I guess it depends on the kids though.

In the extras, there’s a ton of stuff to watch. The extras are available on Blu-Ray, DVD and in Movies Anywhere as well. I reviewed this one through MA and thankfully Disney includes a lot of the featurettes in there as they do for Blu-Rays. Not all studios include that though. There’s a featurette of the crew visiting Mexico and doing lots of research. I love when they show us things like this, and Pixar always does it right. You got people sketching everything in sight, taking over 1000 pictures a day for reference. How I would love to work at Pixar. There’s a featurette on the crew’s family rules and showing more of their trip down to Mexico. Plus, there’s how to draw features, commentary, stuff on the music, deleted scenes, and lots more. Pixar does it right when it comes to extras.

I’m 99 percent sure Coco will win Best animated movie this year and if I had it my way, it would have been included in Best Picture as well. It’s one of the best Pixar movies, the animation is outstanding, the story is sweet and relatable to many and if you don’t shed a tear for this, you’re not a human.

Features:
Welcome to the Fiesta
Mi Familia
Dante
How to Draw a Skeleton
Audio Commentary
A Thousand Pictures A Day
The Music of Coco
Land of Our Ancestors
Fashion Through the Ages
The Real Guitar
Paths to Pixar: Coco
How to Make Papel Picado
You Got the Part!
Deleted Scenes
Trailers & Promos