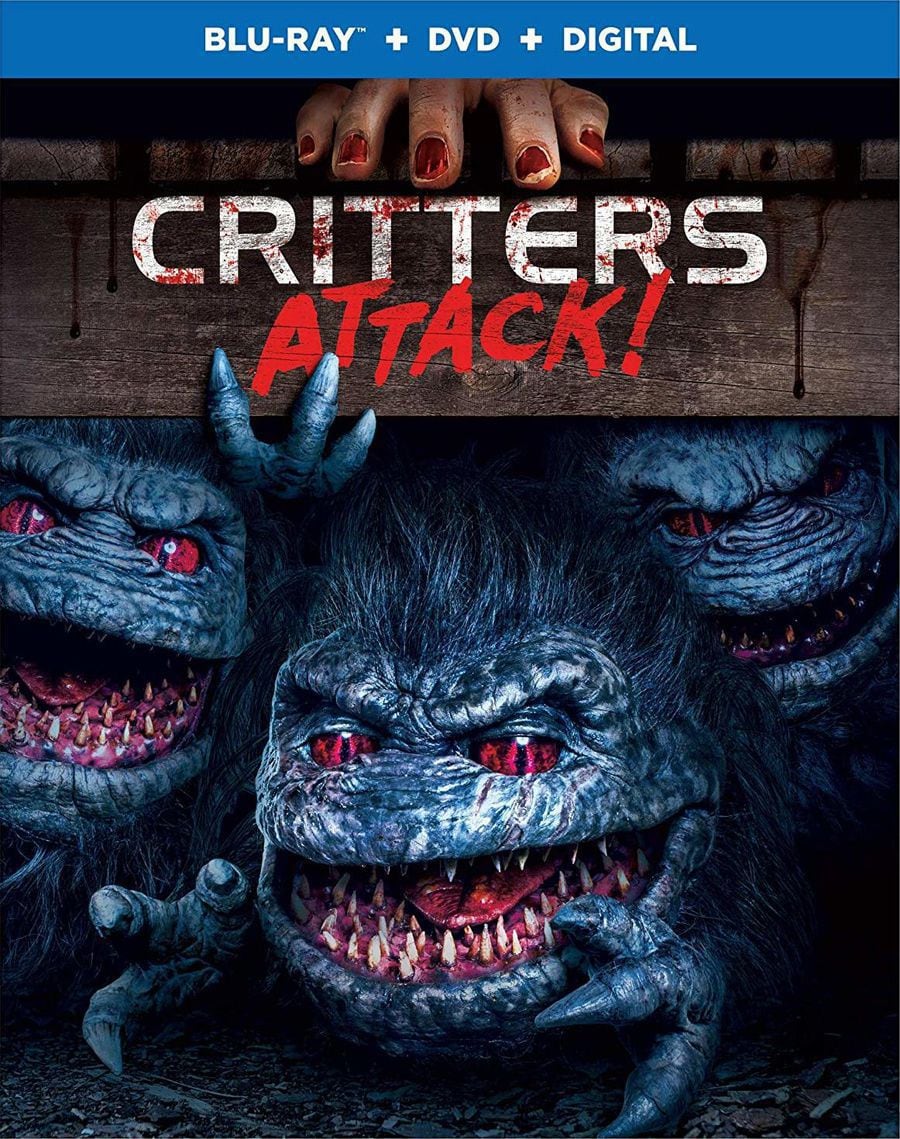 “Critters Attack” follows the unfortunate journey of Drea (Tashiana Washington); a college hopeful who takes a job babysitting the children of a professor for the college that she hopes to attend. With her brother in tow, and her drunken police officer uncle breathing down her neck, Drea arrives to what she expects as an uneventful day of babysitting and phone-watching. Struggling to find things to entertain the professors two children, the foursome decide on a nice walk through the local park to get their blood pumping. During their jaunt, they stumble upon an injured animal of unknown origin and decide that they have to help it.

Taking the Critter to the ranger station proves uneventful as creatures that look like the injured creature only more evil have beaten the children to the ranger station…and devoured the entire staff!!! With no answer to their knocks on the station door, the kids decide that the next best thing to do is to take the creature home to tend to its wounds since there are no veterinarians open on the weekend. Not soon after, they discover that there are other creatures like the one they found and that they are much less benevolent than that particular Critter.

Escaping with their lives, they tend to the wounded and try to find out what exactly is going on around town. Unfortunately the other critters manage to follow them home and attack the injured Critter once again. The children decide to look for Drea’s uncle and discover that the chaotic Critters are running rampant around town. Upon discovering the chaos being caused by the alien creatures, a mysterious woman named Aunt Dee, played by former “Critters” veteran Dee Wallace, who played Helen Brown in the first “Critters” movie, sets an unknown plan in motion.

From this point on chaos, violence, death and destruction occur in the most over-the-top and morbidly humorous kind of ways. At one point a giant ball of Critters squashes someone to death while trying to help the children out. We soon discover that the injured Critter is actually a Critter queen and has come to our planet to exterminate the evil group of Critters. With the help of the kids show decide to stop running and fight back, as well as Aunt Dee, the Critter queen emerges victorious. While the town will never be the same again, the children find solace in the fact that they have defeated the Critters and saved their planet from extinction…or did they?

Having been a fan of the original movie series in the 80s and 90s, “Critters Attack!” pays homage to the goofy violence and all-around campiness of the franchise and does a good job of setting up a new one based off of the originals. I’ve always been a fan of these types of horror comedy movies and “Critters Attack!” is no exception. At times it purposefully goes full camp with gore or in regards to the Critters’ personalities and while sometimes parts are just bad, it kind of adds to the charm. You don’t go into a “Critters” movie expecting Oscar-winning story and special effects. You go into it expecting the unexpected in an over-the-top horror comedy romp through nostalgia and 80s cheese.

Bottom Line: The Critters are back and they’re up to their no-good, dirty rotten tricks again and then some. You either love nostalgic 80s and 90s horror comedy or you don’t. If you do, then “Critters Attack!” is a great romp down campy horror sci-fi goodness.