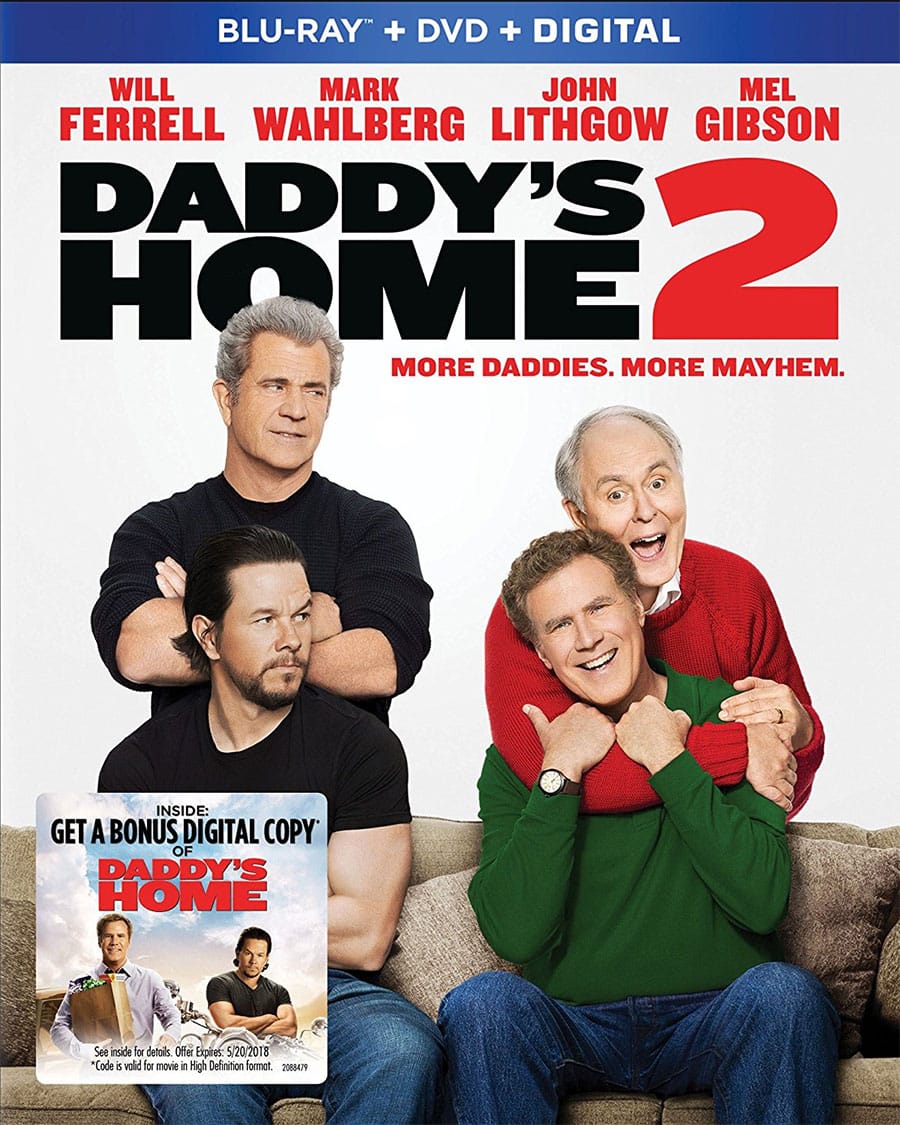 The sequel no one asked for: Daddy’s Home 2. While the first movie had some funny moments, this one is just atrocious and not funny at all.

Brad (Will Ferrell) and Dusty (Mark Wahlberg) have become friends and have a co-Dad system in place for watching the kids. Dusty has remarried Karen (Alessandra Ambrosio), who has a daughter and her father is muscle head Roger (John Cena). Things are going okay until Brad and Dusty’s fathers pay a visit for Christmas time. Dusty’s father is an ex-astronaut and womanizer, played quite perfectly by Mel Gibson. Brad’s father is Don (John Lithgow) and their relationship is weird and the opposite to Dusty and his Dad’s. I’d tell you more of the plot I already forgot what happened.

I watched Daddy’s Home once and it was okay. I didn’t think it called for a sequel but here we are. I tried to have an open mind for it but man, despite the good cast, this wasn’t very good. I’m a big Will Ferrell fan and just everything about this seems wrong, not funny and a quick cash grab. It made 180 million at the box office so I can see why it was made again but the quality definitely suffered. This is similar to Bad Moms Christmas, both started out as non-Christmas movies but their sequels are. Both aren’t funny but at least Bad Moms Christmas was better and rated R.

The writing for this is poor, the jokes fall flat and Will Ferrell is better than this. Daddy’s Home 2 sees him getting smacked in the face repeatedly and getting hurt throughout the movie. It’s a shame since I like the majority of the cast members so I don’t really blame them for this. There’s questionable scenes in the movie, especially with all the stuff happening in the real world. There’s a hunting scene where they are teaching the kids how to shoot, and end up injuring Mel Gibson’s character. The kid then goes gung-ho with the gun trying to shoot an animal. It left a bad taste in my mouth, especially with the latest school shooting in Florida. Not sure why that scene needed to be included in the movie. Towards the end, I was ready to just turn the movie off just because of how awful it was. Everybody is stuck in a movie theater for Christmas day because of the weather. A movie theater with choir singing in it? That’s a nitpick but come on, that doesn’t happen. Fighting happens between the characters and all that Full House type of shit that happens at the end of an episode. Then, they all end up singing. Yes, John Cena sings too. I had to fast forward because I couldn’t take it anymore. Which pretty much sums up Daddy’s Home 2.

If you want to watch deleted/alternate/extended scenes, be my guest but I didn’t feel like watching it this time around. There’s also featurettes on the making of, a gag reel, a quick feature on the random Sully cameo, one on the new Dads in the movie and more.

I was hoping this movie would be decent to watch every Christmas but this will be one to avoid. It’s not funny, everybody in it felt like they phoned it in, writing is bad and it’s not a good movie…at all. Re-watch Elf for a good Christmas movie starring Will Ferrell.