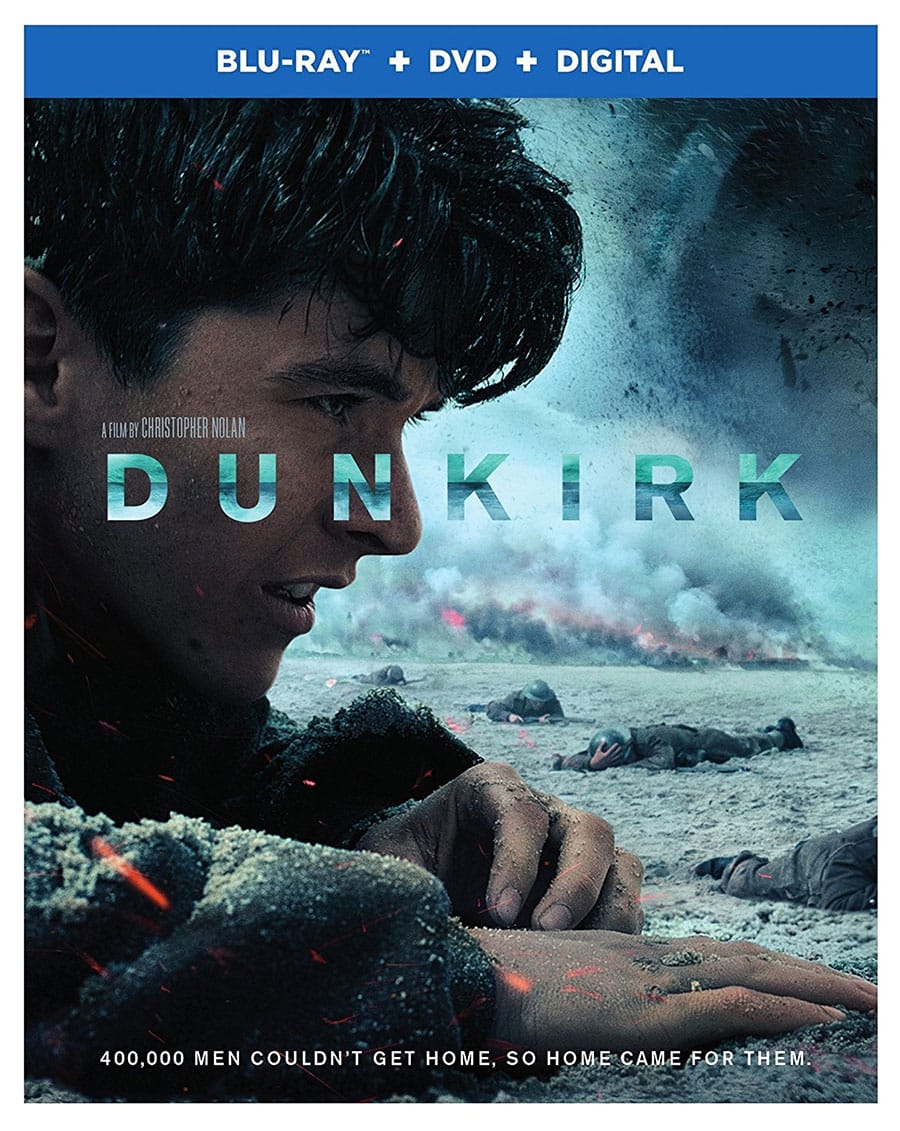 I usually try to get to the movie theater to see a Christopher Nolan movie but I wasn’t able to this time around. The amount of craftsmanship that he puts into his movies, and an overall effort from everyone involved, they deserve to be seen on the big screen. Dunkirk is no different. It’s a remarkable war movie that needs to be seen at least once.


Dunkirk is based on the true story of allied forces being surrounded by the Nazis and the sea. They are trapped at the beach, and getting repeatedly bombed and shot at by German bombers and planes. Spitfire planes featuring pilot Farrier (Tom Hardy), try to protect the helpless soldiers like Tommy (Fionn Whitehead) on the beaches. Meanwhile, a bunch of British boats like Moonstone with Mr Dawson (Mark Rylance), his son and his friend make their way over the channel to help out and provide rescue to any soldiers they can get before it’s too late.

Dunkirk is an intense film, and one of the best war movies I’ve seen in awhile. I’ve a huge fan of WWII movies and history but I honestly never really knew about Dunkirk. I guess I just followed the stuff I’ve seen in TV and movies, and followed the Americans the closest. I’m happy this movie exists so I get to watch some stories on what happened before the USA entered the war. It’s not like other war films where there’s this huge character arcs or follows around a certain bands of soldiers.

There’s a few key characters in the movie but for the most part, it’s not like you even know their names, where they came from and other things like that. Fionn Whiteheard plays one character, who plays Tommy. Tom Hardy plays the pilot Farrier but definitely adds a bit to the role but the character is still pretty straight forward. Still, I cared about the pilots the most in this movie. Mark Rylance was great in what he had to do, and Cillian Murphy is another Nolan favorite doing a good job. Harry Styles held his own, although he didn’t have too much to say in the movie. I’m curious to see where he takes his acting career though. Kenneth Branagh stands out as the Commander, and who probably had the most speaking lines in the movie. The thing with all of these actors is they could have been replaced with anybody. Nolan specifically chose British actors and a lot of unknowns.

Hans Zimmer pulsating score is unique and perfect for the movie. It provides all the tension and heart palpitations you’ll experience when watching this. In fact, if this score wasn’t in the movie, I’m not sure it would have been as effective. He uses clocks, and sounds like razors to the strings like he’s used for The Dark Knight. At one point, the music was so intense, I just had to pace around the room and find something to eat. In a way, kind of glad I didn’t see this in the theaters because I’d probably end up having a heart attack since I wouldn’t really be able to move around.

What I love about Nolan’s movies is the use of practical special effects and him barely using CGI. The budgets may be higher but man, does it look better on film. I just loved how they shot the dog fights and put the cameras on the planes. Nothing CGI. The actors were flown up there for close up shots, but obviously not flying the planes. I really hope they use this kind of technique for the Spielberg / Hanks HBO miniseries The Mighty Eighth.

You can see how he and his team do everything in the extensive behind the scenes featurettes. Each featurette is broken up into a few different sections: creation, land, air, sea and more. Some features are longer than others but I liked the ones on the land, air and sea the most. For the spitfires, they tracked down the real planes in Texas to use them, as well as recreated some since they had to mount cameras and drill holes into them. With all the extras on a separate disc, it’s longer than the movie. Seeing the movie alone is impressive, but seeing how everything is done makes it even more impressive.

I would say my biggest complaint of the entire movie is him using the IMAX cameras and the film cameras. I wish he would just pick one or the other because having them switch constantly throughout the movie was really distracting for me. Oh, the black bars went away, oh they are back again, of they are gone again, etc. He’s done this with his other movies but I just wish he would shoot everything in IMAX so it fills up the TV. The Blu-Ray looked super crisp but I can imagine it looked unbelievable in 4k.

Dunkirk isn’t like other war movies and I think that’s a good thing. It will be really cool to see this and then go out and see Darkest Hour with Gary Oldman. Nice companion movies. If you don’t know anything about Dunkirk, this is a great movie to catch you up to speed on it. Even if you know the history, it’s still a remarkable war film, although not for everyone.