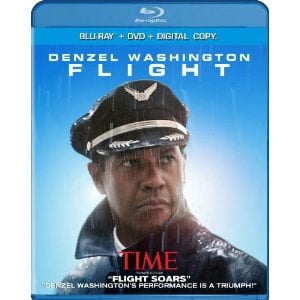 I didn’t think much of Flight when I saw the endless amounts of commercials for it while watching the Daily Show online. Then Denzel got nominated for his performance so I decided to give it a chance. Flight is a good drama that shows the aftermath of a plane crashing.

The film is about airline pilot Whip Whitaker (Denzel Washington) who starts his day off with a little bit of sex, drugs and booze. Then decides to fly an airliner with over a hundred people on it. While in mid-air, they encounter a disastrous problem that he manages to save the majority of people on the plane. But things start to hit the fan when people begin to wonder who or what is at fault of the crash.

You know a movie is going to be good when it opens up with some nude scenes by Nadine Velazquez (My Name is Earl). It’s not necessary for the movie but hell, I certainly appreciated it. Ok, now that I got my perverted side out of the way…I though Flight was a good drama that was interesting in parts, slow in others. Denzel certainly did a great job but if I’m being honest, I think he’s been better in other movies that should have gotten him Oscar nominations. He definitely drives this movie and he plays a likeable prick, but I think I like his movies in the past more than Flight. Whip Whitaker felt very similar to Tommy Gavin of Rescue Me. Alcohol abusing, destructive, arrogant douchebag but man, you certainly root for the guy at times. At other points, I wanted to see him go to jail and suffer just because he was going down a destructive path. In the end, I’m happy with the way the movie ends and think it’s fitting. I didn’t know which way it would go.

Robert Zemeckis did an excellent job with the movie and only filmed this in 35 days! I think he should stick with live action movies for awhile and not do the animated ones but that’s just my opinion. Other than a bit of slowness and the pointless focus on Kelly Reilly’s character in the beginning, I thought this was a solid movie. Sure, it might be a little unrealistic with some of the plane scenes but it’s a movie afterall. Can a plane fly upside down like that? I don’t know, not a pilot.

If you want to watch some extras after the movie, there’s a few: Origins of Flight, The Making of Flight, Anatomy of a Plane Crash and some other things. Origins of Flight is just about how the movie got made and how Gatins came up with the idea. The other featurettes are your usual bonus features that have interviews, behind the scenes footage and show how they did certain things. It’s informative but not that drawn out.

I don’t think Flight is the greatest movie ever but its a good movie about a complex character. The character is likable, but kind of a douche at the same time. It’s Denzel, how can you not watch this!?