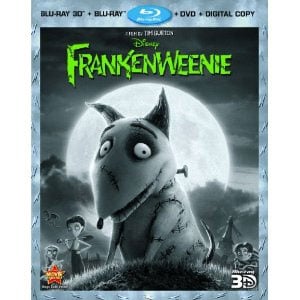 Tim Burton has made another pleasing full-length movie that both adults and children can enjoy…even though this might be too dark or upsetting at times for young kids.

Frankenweenie is based off Tim Burton’s original idea and TV short of the same name. It’s about a young boy who likes to dabble in filmmaking and science, Victor Frankenstein and his cute dog Sparky. Sadly, Sparky gets killed by a car and Victor is devastated. He decides to take what he’s learned from his science teacher and try to bring his dog back to life in his attic. The experiment works and but starts to affect Victor’s family, classmates and the entire community, for better or worse.

Tim Burton’s movies have seen a bit of a rough patch in the last 10 years or so. I enjoyed Alice in Wonderland, and the same goes for Dark Shadows but they weren’t as strong as Tim Burton’s early films. I don’t think he’s had a consistently good movie since Sleepy Hollow but even that’s up for debate. I loved it but others don’t. Fortunately, I think Frankenweenie is definitely signature Burton and one both adults and children will like. The theme of a dog dying might be traumatic and upsetting for little ones, hell, even for me. I definitely got choked up a few times. Whenever it comes to puppy movies and them dying, I can get very emo. I’m still getting over Marley & Me. Thankfully, this one isn’t as depressing as that one. Frankweenie’s moments are similar to that of Up or something. The movie has it’s fair share of laughs too.

Besides the fun spoof on the Frankenstein story, the animation was amazing as well. I actually thought the movie was done in CGI but it’s actually done in a stop motion style. Nope, this was done with models and miniatures and that completely blew me away. The amount of people that had to work on that, and how many hours/days/months/years just to move eyelids and mouths. Woof, I could never do that and don’t have the patience. But I think they succeeded in making stop motion look modern and updated, even though it’s in black & white. Stop motion or not, working for Tim Burton would be a dream!

The Blu-Ray contains a few special features like the original live-action short by Tim Burton, a quick new original short featuring Sparky and Victor, a tour exhibit at Comic Con, and some other things. There’s a Plain White T’s music video of “Pet Sematary,” but they kind of butcher the original song I think. I liked the featurette about the miniatures and shows you just enough to satisfy hardcore animation fans like myself.

Frankenweenie surprised a little, in that I think it’s the best Tim Burton since Sleepy Hollow. I think this will be a movie I put on every Halloween time, along with Sleepy Hollow and A Nightmare Before Christmas.