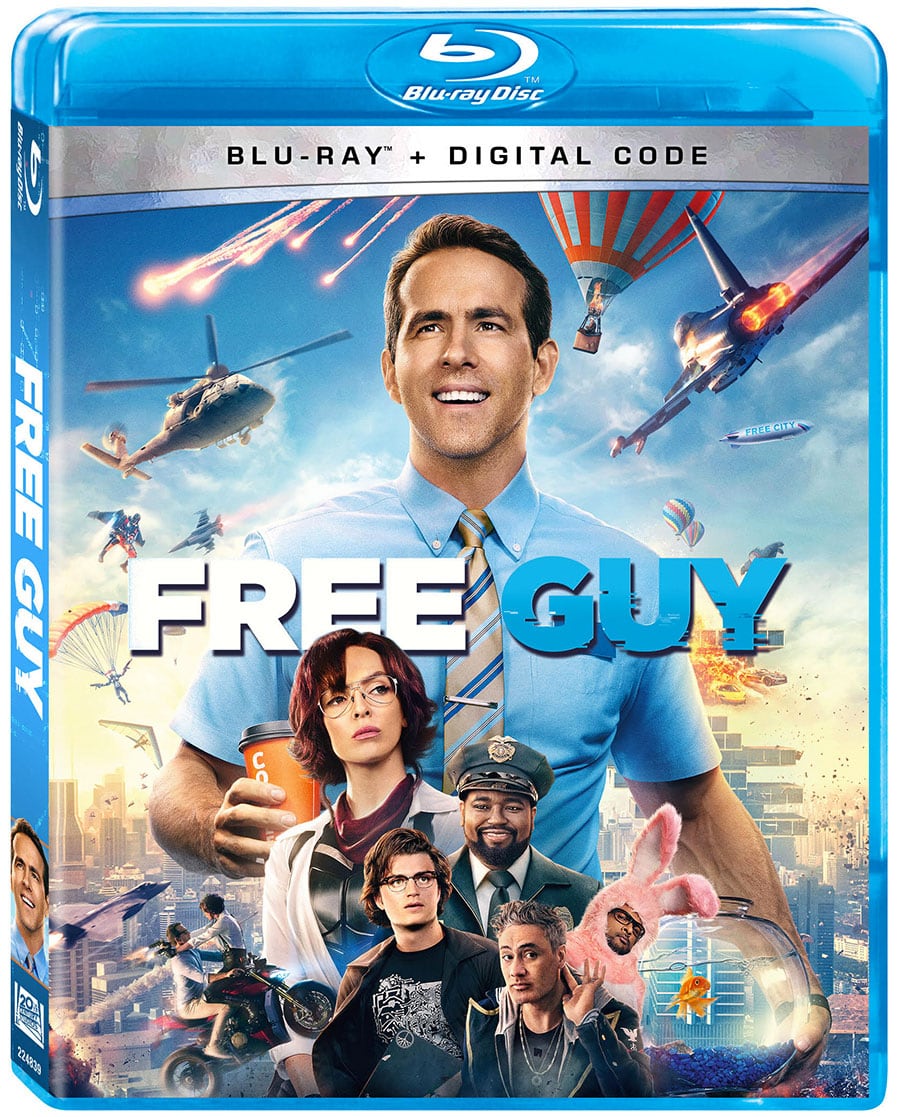 The latest Ryan Reynolds movie that isn’t called Deadpool is Free Guy. If you’re a gamer or just like silly and fun movies, this one’s for you!

The movie centers around a bank teller Guy (Ryan Reynolds), who is a non-player character in a game called Free City. He leads the same life and scenarios everyday with his best friend, Buddy (Lil Rel Howery). He soon finds out he’s actually a character in a video game. In the real world, Millie Rusk (Jodie Comer) tries to bring down the head developer of Soonami Games, Antwan (Taika Waititi) of Free City, who stole her source code. Millie teams up with her old co-worker and co-developer who still works for the company, developer Walter “Keys” McKeys (Joe Keery). With the help of newly enlightened NPC Guy or Blue Shirt Guy, Millie, and Keys, they try to take down Antwan. It sounds confusing but just go with it.

I didn’t have any expectations going into Free Guy. I guess the same can be said for the majority of people who watched it since it had a great Rotten Tomatoes score. It’s enjoyable, has some enjoyable moments and some really fun cameos in it too. I thought the second half of the movie was better than the first. Towards the end, it just had some great scenes that I’m not going to spoil for you.

Ryan Reynolds was doing his thing, so by this point you’re either on board or not. I like Ryan and think he’s hilarious. Having Lil Rel as his friend or “buddy” was great. I’m sure he made some calls to have some cameos in the movie. There were some voice cameos I didn’t even recognize until looking up the credits. I liked the storyline of Millie and Walter, and in a way felt like you were watching two different movies. One about the characters themselves and the developers who made the game. Having YouTube and Twitch people in the movie made it kind of annoying for me, but I’ve never been the type of person to watch these “influencers.” Never been the type to watch someone play a video game; I’d rather just play the damn game myself. So those scenes with them were cringey to me. But I get it, it’s a video game movie.

The Blu-Ray offers up a few featurettes like deleted scenes, gag reel, Welcome to Free City and a fight featurette Dude vs Guy. The gag reel was, of course, funny. When you have people like Ryan Reynolds, Lil Rey and Taika, you’re going to have some hilarious improv gags. Taika had the best moment in it when the lighting changed to bright white in the office building, and he pretended to float to the light like he was dead. The man is a comic genius. The Dude vs Guy fight featurette was 15 minutes long and impressive how much detail they went into it. It’s always complicated filming a fight scene with a character fighting themselves, but this was ten times more complicated. In the end, it’s the best scene in the movie.

Think of Free Guy like a combo of Wreck-It-Ralph, Tron and The Truman Show. It has it’s fun moments, there’s some romantic comedy elements to this movie as well. It’s got a bit for everyone to like, or don’t. I guess it depends on what entertains you these days. This is a gamer movie, but you don’t necessarily need to be a gamer to enjoy this. I’m an old school NES gamer so you don’t need to be a modern day one. I thought the second half of the movie was the best and made the movie. The Dude vs Guy fight was just awesome and hilarious. There’s not much else to say besides it was a fun movie, isn’t that what you want for a movie like this?