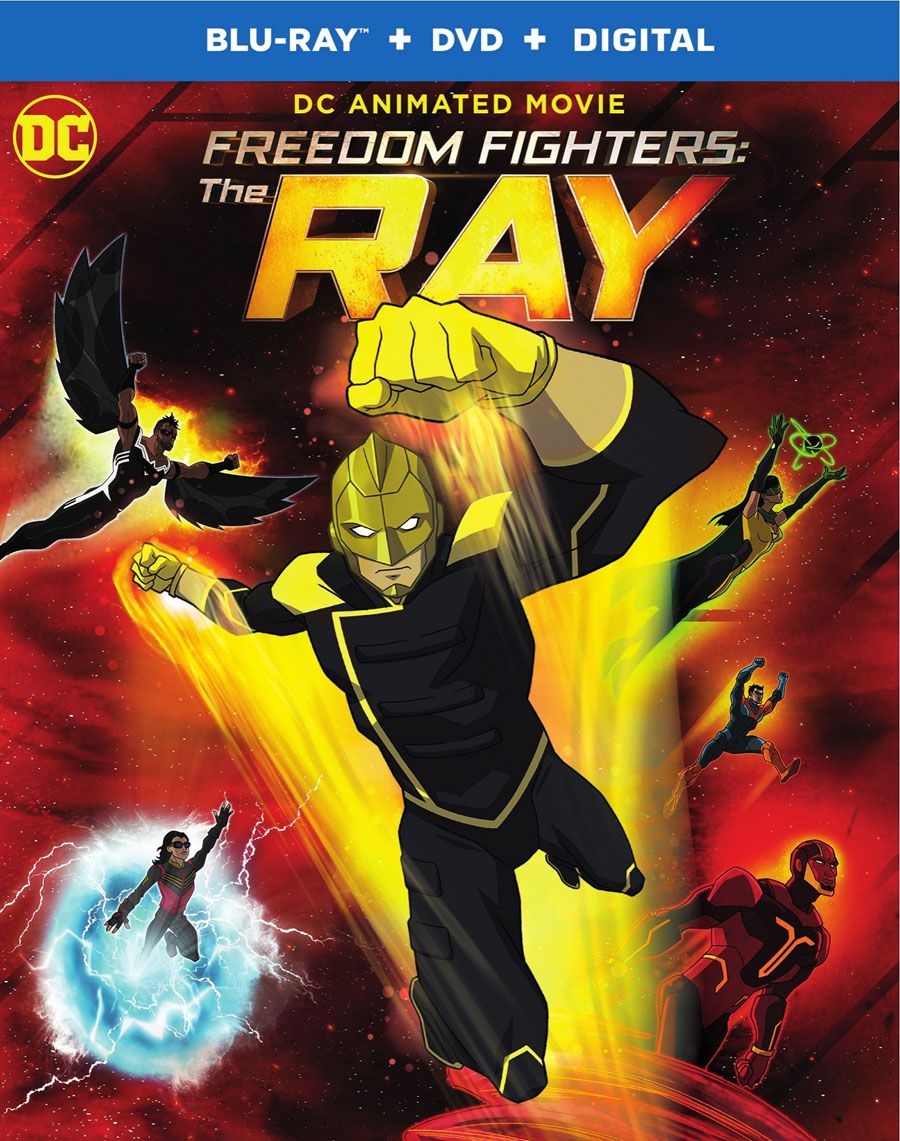 The Ray lights the way against evil! “Freedom Fighters: The Ray” follows the Ray and his band of Freedom Fighters as they fight against the evil Nazi regime that rules their home planet of Earth-X and try to prevent them from crossing over into Earth One to do the same to our planet.

“Freedom Fighters: The Ray” is the collected edition of the DC web series on the CW Seed of the same name, similar in vain to the “Vixen” web series/animated movie. It is loosely tied in with the Arrowverse as well as the Earth-X crossover that took place on the CW shows. Arrowverse actors portray the voices of their live action counterparts such as Russell Tovey as the Ray, Melissa Benoist as Overgirl and Carlos Valdes as Cisco Ramon.

This collection is edited together as a full-length movie much better than the Vixen one was and felt much more coherent and seamless. The animation is decent and has many qualities of the bigger DC animated releases. My only complaint is that it seemed like every human in the movie had dark lipstick only on their upper lips. Other than that minor complaint the animation was smooth, the action sequences were creative and full of energy and the voice acting was done well overall.

Loosely tying into the Earth-X crossover, “Freedom Fighters: The Ray” kicks off with the Earth-X Ray and his Freedom Fighters as they fight to survive against the New Reichsman which consists of Overgirl, Black Arrow and Blitzkrieg…Nazi versions of Supergirl, Green Arrow and the Flash respectively. With the Red Tornado taken apart by Overgirl and his memory cortex, which contains every iota of information on the Freedom Fighters, in her possession the Freedom Fighters must make one last stand and prevent the cortex from falling into the Nazi’s hands. With the help of Earth-X Vibe and the sacrifice of a couple of members of the team, the Ray manages to get possession of the cortex and teleport along with it to Earth One. There he seeks out his Earth One counterpart and passes on the cortex as well as his powers upon death in order to protect the cortex.

Earth One Ray Terrill is by no means super hero material at first. He has lost his job, struggles to hide his sexual preference from his family and doesn’t take the Earth-X Ray’s warning seriously. As he goes on his super hero odyssey he discovers self-confidence in not only his use of his powers but to finally come out of the closet as gay to his parents and to stand up to the Nazi oppressors that want nothing more than to spread their reign amongst the multiverse.

This leads to the Freedom Fighters and the Ray uniting the forces of Earth-X in one last stand against the Nazis and the New Reichsman for the freedom of Earth-X. The Ray shows all that he’s learned and exactly how powerful he is as he is tasked with taking down Overgirl one on one. Upon defeating the New Reichsman, the Ray decides that he has more to fight for on Earth-X as he will try to bring about freedom and opportunity…that which he took for granted on his own world…to the citizens of Earth-X.

I thought that it was great that they were able to get some of the actors from the CW shows to voice their characters much like what was done for the Vixen web series. I also thought that the animated series versions of the Freedom Fighters were very much true to form to their comic book counterparts. The Ray has always been considered one of the more powerful characters in the DC universe and he was given the opportunity to shine, more so than he did in the live-action crossover. It was also fun to see some version of Black Condor and Phantom Lady in animated form. The addition of an Earth-X Cisco/Vibe felt tacked on and was more or less a McGuffin for the story since it takes place before the Freedom Fighters actually meet Cisco and Team Flash in the live action continuity.

“Freedom Fighters: The Ray” is a fun addition to the Arrowverse live-action/animated lore and seems to open the door for a multitude of seasons and animated features in the Earth-X universe. It’s well-written, has a strong social message as well as some general life lessons to be told and has a surprisingly good animation style to it…especially the fight scenes. If you were a fan of the live-action Earth-X crossover or are somewhat familiar with the Freedom Fighters from the comics, “Freedom Fighters: The Ray” is a must see. While loosely tied to the events in the live-action Arrowverse, it was still a great taste of the history of that universe and its evil denizens.

Features:
An Interview with Russell Tovey, the Voice of the Ray

Bottom Line: “Freedom Fighters: The Ray” is a great addition to the Arrowverse Earth-X lore and opens things up for many future seasons and animated installments following the Freedom Fighters fight to save Earth-X.