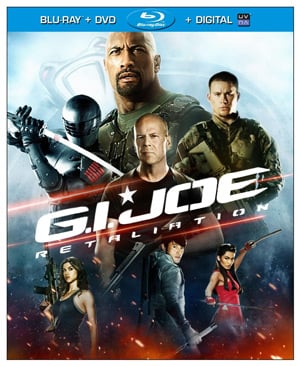 G.I. Joe: The Rise of Cobra was a mess of a movie but thankfully G.I. Joe: Retaliation is a better movie thanks to The Rock and Bruce Willis.

After G.I. Joe: The Rise of Cobra, Cobra Commander and Destro were captured by G.I. Joe, but Zartan was still at large since he was under the identity of the president. Going forward with Retaliation, Duke (Channing Tatum) now leads a G.I. Joe unit along with his buddy Roadblock (Dwayne Johnson). While on a mission, the team is ambushed and only a few make it out alive. The remaining Joes find a way back to the US and find out that the president called the airstrike against them. They end up getting help from the original Joe, General Joe Colton (Bruce Willis) and an unlikely enemy joins their ranks as well…but just this once. The team races to uncover the mystery of their betrayal with the president, and to stop Cobra before they harm anymore cities. Da Bum bum bum buuuummmm.

I never saw G.I. Joe: The Rise of Cobra until the day before I sat down to watch the sequel. I just never had the desire to see the movie. A lot of things just looked so cheesey with the overly-used CGI, the bad acting, and just major design fail from the look of some of the characters. At least they got Snake Eyes right, especially with Ray Park playing the cool character. Thankfully, Stephen Somners didn’t direct this one and this movie was a lot more entertaining. Although there was still some problems with Retaliation.

As much as I think Channing Tatum can’t act, I still think he was mismanaged in this movie. They apparently re-shot a lot of scenes with him in it but can’t imagine what they used. I guess they wanted a clean slate besides a few people from the first movie. They replaced him with a boring, barely noticeable Flint in the movie. Ok so Flint did a few parkour things, big deal. Dwayne Johnson’s presence was obviously something that was needed for this franchise to continue. Bruce Willis was a welcome sight even though he wasn’t in this movie all that much either. I particularly liked the addition of Adrianne Palicki, for obvious reasons. Having Ray Stevenson on board as Firefly was very cool because I always liked that character from the animated series. And of course, Ray Park and Byung-Hun Lee as Snake Eyes and Storm Shadow were still the highlights of the franchise.

G.I. Joe: Retaliation corrected a lot of things that the first movie dropped the ball on. They removed the sci-fi elements to the sequel, they made Cobra Commander actually be the Cobra Commander and made him look like the character as well. I just didn’t like the voice and felt he should had that nasally snake voice. Plus, he’s not in this movie a hell of a lot and it’s more about Zartan.

Other things I thought that were better included better fight scenes, better action (Himalayas fight scene), and the CG was ten times better. Essentially, this movie should have been the first movie except there should have been a lot more characters. Another thing that would have been great if Roadblock said “body massage” in the movie to give reference to the PSA spoofs.

If there’s a sequel, I’m hoping for a few things: more characters but not a ton because it will be hard to keep track, don’t kill off more main characters, have Destro return as well as Baroness, have Cobra Commander get that signature annoying voice somehow, and maybe introduce The Evil Twin Brothers or some other classic Joe villains.

The Blu-Ray extras contained a lot surprisingly. There’s a handful deleted scenes that were okay, but the selling point behind the extras is the hour plus of behind the scenes look at the movie. You see A LOT of what happened during the filming, which I loved! The actors talked about their characters, you see them performing behind green screens, going through military training and lots of stuff like that. Definitely worth watching if you like to see how things are made and also if you like the movie as well (obviously).

G.I. Joe: Retaliation is a much improved movie over the The Rise of Cobra but there’s still some problems with it. If you don’t have any expectations and think back to when you played with G.I. Joe toys (if you did) as a kid like myself, you’ll find this movie fun.