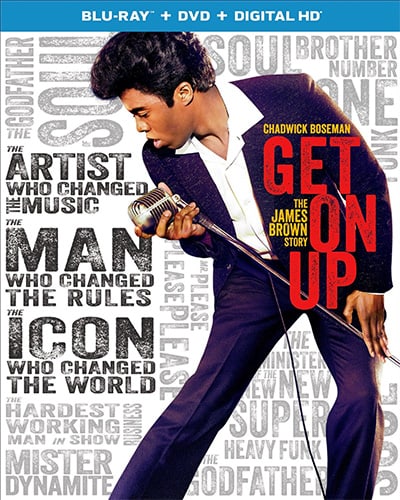 Get On Up is the latest music biopic, although it seemed like it came and went pretty quickly from theaters. The James Brown film is decent but I thought could have been a lot better.


The film is about the life of The Godfather of Soul, James Brown (Chadwick Boseman). Get On Up follows James from his early impoverished childhood, to his troubled younger years and all the way through his even more troubled older years. While doing a stint in prison for stealing a suit, James meets Bobby Byrd (Nelson Ellis) and those two hit it off. Bobby invites James back to his house after prison and James eventually joins Bobby’s gospel group. The group, The Famous Flames, get noticed by King Records and James becomes the leader of the band even though the rest of the members didn’t want that. New members of the band join and that roller coaster continues for most of the movie. Despite being one of the most influential musicians of the 20th century, James Brown had a troubled life which this movie only touches on briefly it seemed.

I didn’t know what to expect from Get On Up but I thought it was just okay. Chadwick’s performance is good and certainly sounds and looks like James (with the hair). He certainly is the reason to watch this movie. Unlike Jamie Foxx for Ray, I don’t think Chadwick sang any songs though. All the music was archived music, which means at least the soundtrack is awesome. That Jimi Hendrix movie that also came out wasn’t allowed to use any of those songs which makes it pretty much pointless to even make a movie then. Thankfully all the rights were in the producers’ (Brian Grazer, Mick Jagger) hands.

I like Tate Taylor as a director and especially loved The Help but not sure I liked his direction on this one. The story and the way it was shot was all over the place. I just wished they didn’t go back and forth with the flashbacks and places in James life. It made it really confusing to tell when things were and just made it hard to follow at times. First James is old, then he’s young, then a teen, then old again, then back to being somewhat young. See? Show him young first and then get to those other points after that instead of going back and forth. Besides, I just felt like something else was missing from the movie. I felt like things were just glanced on briefly and then onto the next thing. But with all that said, the movie is still okay and entertaining. It’s something to put on a slow weekend I suppose.

The Blu-Ray features has a bunch of featurettes like deleted/extended scenes, full song performances, extended song performances, a bunch of featurettes. I was amazed that it took so many years to get this movie made. Brian Grazer had the rights and eventually Mick Jagger has some rights so they joined forces to make the movie. I guess when James Brown passed away, it made things tricky. I watched the featurettes but didn’t watch the full performances at all. Tate Taylor usually does good on the special features, I’ll give him that.

Get On Up has it’s moments and a good performance from Chadwick Boseman, but I think the story and the way the movie is edited is a bit clunky. It’s not a bad movie but I would have done things differently if I was directing.