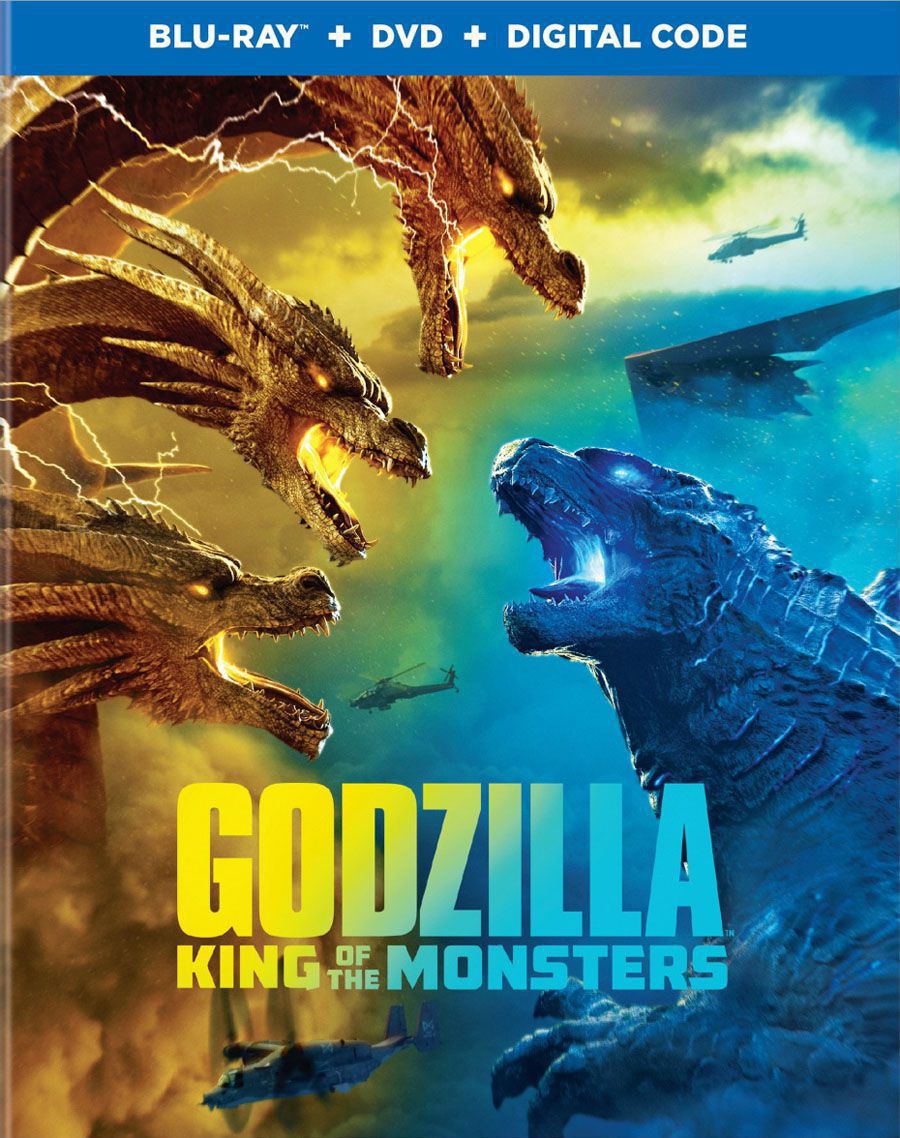 Five years after the modern world was introduced to the power and might of Godzilla and other giant prehistoric creatures, the monsters now dubbed “Titans” have gone dormant. A mysterious global organization known as Monarch has appeared on the scene to study and investigate the Titans and the destruction left in their wake.

The story focuses on a family that has split up after the death of their son during the monster battles in San Francisco. Dr. Emma Russel (Vera Faminga) and her daughter Madison (Millie Bobby Brown) are stationed at one of the Monarch bases as Dr. Russell is a lead scientist on a project that is researching a mysterious larva that has appeared underground. Dr. Russell has also developed a way to possibly communicate with the larvae as well as other Titans. When the larvae awakens and does damage to the facility as well as those stationed there, Dr. Russell uses her devices dubbed “Orca” to calm down the beast. Suddenly bullets fill the air as Monarch workers are gunned down and Dr. Russell and her daughter, along with Orca are swept away into a vertibird.

With Dr. Russell gone missing, a team of Monarch scientists reach out to a friend and former colleague in Mark Russell, Emma’s ex-husband. Reluctant to get involved, he takes their offer of trying to find the location in which his ex-wife and daughter were taken to. An underwater encounter with Godzilla leads the team of friendly Monarchs to Antarctica where an unclassified Titan known only as “Monster Zero” is located. Arriving to find that the other Monarch staff has been slaughtered, Mark Russell discovers that his family is being held hostage and decides to do something about it. Entering the facility with only a handgun, he comes face to face with the man responsible for kidnapping his family…eco-terrorist Alan Jonah. Unfortunately, Jonah has already put his plan in motion and Dr. Russell ignites the explosives placed on the wall of ice in which Monster Zero is trapped in, bringing the facility to rubble and freeing the unknown Titan.

As both groups flee the Monarch base, Monster Zero rises from the ice pit and begins causing chaos and destruction. With the help of Orca, Dr. Russell manages to speak to and control the actions of Monster Zero. When things are at their most bleak, Godzilla arrives to face off against Monster Zero in the first of many epic Kaiju battles throughout the movie.

As the plot begins to thicken, it’s discovered that Dr. Russell is working with Alan Jonah in hopes of releasing the Titans one-by-one to restore the earth and bring balance back to the planet. The arrival of Monster Zero who is discovered to be known as Ghidorah and hails from outer space, has thrown a proverbial wrench in their plans with his unnatural nature. As all of the nearly 20 Titans awaken at the same time, Monarch realizes that their only hope for survival is the monster that they’ve been preparing to kill for the past five years…Godzilla!

During a battle with Rodan and Ghidorah, Monarch takes the chance of striking with a weapon called the Oxygen Destroyer (classic Godzilla reference!) as Godzilla faces off against Ghidorah. The weapon succeeds in killing the sea life in the strike radius and seems to take out Godzilla himself while Ghidorah is not affected at all. Ghidorah rises from the sea and claims his throne a top a mountain in one of the coolest and scariest scenes in any Godzilla film.

With Godzilla gone, the members of Monarch appear to be without hope…until Mothra appears to give guidance and alert them that the king of the monsters is still alive, but barely. Mark and crew formulate a plan to seek out Godzilla and supercharge him with nuclear energy. As they travel via submarine into the depths of the ocean, they’re sucked into an underground tunnel which takes them 600 miles off course in a matter of minutes. Under the deepest reaches of the oceans are a group of tunnels that lead to the center what they believe is the hollow earth, a group of fast-travel tunnels far from the reaches of humanity. Godzilla goes there to rest and heal and they discover that he is very weak but alive. With radiation levels too high to go on and weapons systems damaged from their rough travels through the tunnels, Dr. Serizawa (Ken Watanabe) sacrifices himself in order to manually detonate the nuclear warheads and bring Godzilla back to life. Thankfully, their plan works and Godzilla resurfaces and heads out finish the battle once and for all.

Meanwhile, Dr. Russell’s daughter Emma realizes that her mother has gone too far and steals the Orca device in order to draw all of the Titans together and to halt their destruction. Stationing herself at Fenway Park in Boston, Madison Russell summons Ghidorah to the city with an alpha male call from Orca. Ghidorah arrives and he’s instantly pissed and begins destroying the stadium and its surroundings. Mark and his team follow Godzilla to Boston and derive a plan to rescue Madison and to help Godzilla in his fight against Ghidorah. It is here that the epic monster battle royale takes place. As Ghidorah prepares to annihilate Madison, Godzilla swoops in and saves the day with his atomic breath. As the battle swings back and forth, Ghidorah gets the upper hand and has Godzilla down for the count. Suddenly Mothra arrives and holds Ghidorah at bay but that victory is short-lived as Rodan appears and pairs off against Mothra. Mothra defeats Rodan and is injured but stands with Godzilla against Ghidorah until the very end. On death’s door, Mothra turns to moon dust and resuscitates Godzilla who is now not only supercharged, but nearing complete nuclear meltdown. In another fitting homage to the classic Toho Godzilla films, this version of Burning Godzilla can control his overabundance of nuclear power into energy bursts and he manages to defeat Ghidorah once and for all.

With Madison saved by the sacrifice of her mother, she is reunited with her father on a Monarch plane that is escaping the former city of Boston. They watch as the other Titans arrive in the city and all bow down to the Godzilla the King of the Monsters.

“Godzilla: King of the Monsters” was everything that a fan of the giant lizard and Kaiju monster films in general could ask for. The story was enough to push the plot forward from one monster fight arena to the next and I liked the main group of cast members, especially Ken Watanabe and Mark Russell. Personally, I believe that in any good Godzilla film, the human cast should be secondary to the monsters. They are the stars of the show and they were definitely worthy of that in this movie. Ghidorah was amazing and absolutely horrifying in the best of ways, Mothra was magical, mystical and beautiful, Rodan was prehistoric and more powerful than ever with the lava twist and Godzilla is ever-growing and ever-adapting with even more tricks up his sleeves than the kung fu master version of himself from the Showa era. With this, “Godzilla: King of the Monsters” managed to set up some spectacular set pieces and fantastic battle sequences. The destruction porn was turned up to 11 and the variety of locations spanned the globe and provided the viewer with a variety of stunning visuals paired with state-of-the-art special effects. “Godzilla: King of the Monsters” is easily one of the most visually pleasing and most modern day accurate version of the classic Toho monsters that we’ll ever see!

Having been a fan of the Godzilla movies since I was still wearing Batman Underoos, “Godzilla: King of the Monsters” was exactly what I was looking for in a modern day Godzilla movie. The 2014 film was a great kick start to the modern American representation of the giant lizard but “Godzilla: King of the Monsters” not only expanded upon the true nature of Godzilla but finally brought together other Toho Studios monsters into a shared universe. With King Kong pairing off against Godzilla in a film set for release next year, fanboys everywhere will be getting their wish by bringing the king of Skull Island into the mix for another monster battle banger.

Bottom Line: You’re either going into “Godzilla: King of the Monsters” as Godzilla fan or a fan of blockbuster action films. If that’s what you’re expecting and you’re hoping for one of the most fun big-budget monster films of our time then you’re set. If you’re expecting anything else, then you’re watching the wrong movie.